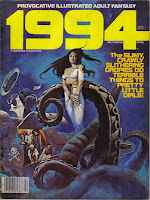 Sanjulian provides a rare cover for this latest issue of 1994. Only six stories in this issue, not too many compared to how many it usually has, but a very good issue.

First is "The Seed!" by Alex Nino (art) and Bill Dubay (story, as Will Richardson). After a major interstellar war has ended, the various races of the universe discover that they are now sterile. The only race left in the world that can procreate is incidently enough, the Earth. The universe sends two creatures with the appearance of human women that sleep with many men; the semen is then used to populate the universe once again. When the Earth destroys one of the ships heading there to get more semen however, it triggers an even bigger interstellar war.

Next is "Jailbreak... On Channel 69" by Jose Gonzalez (art) and Bob Toomey (story). This is a very short story at only four pages long showing a jailbreak at an all women's prison. It is used as a TV program, but ends up getting cancelled partway through. This story's reminisent of the story "The Box" from issue 5.

Third is "Over Four Billion Served" by Delando Nino (art) and Kevin Duane (story). This story features a man writing a letter to the Secretary General of the UN explaining why he should be compensated for spending a lot of money on feeding an alien ambasador. The alien was at an event with the man, and stated that his race would like to start eating humans. Our protagonist tries to change his mind by feeding him various types of common Earth food. The alien is so disgusted by the food that he thinks it is poison and starts barfing it up. This ends up saving humanity as the alien tells his planet that they can't eat us.

Fourth is the fourth part of "The Starfire Saga" by "Rudy Nebres" and Bill Dubay (storym as Will Richardson). This story continues to be the poorest part of the magazine. Kris and Snuffy are still being attacked by the strange monster by the prior part, but are saved by Drago, a strong man in a prehistoric getup. When some starfighters arrive and blast him, his true form, a very small creature comes out of Drago's 'body'. The people from the Starfighters come out and Kris awakens after being knocked out having been raped by one of them. This is where this latest segment ends.

Fifth is the fifth part of Ghita of Alizarr" by Frank Thorne (story & art). This latest segment continues the upward trend started in the previous one. We return to the cave that Ghita, Theneff and the others are training their army of halftroll soldiers. The rogue halftroll, Sef, summons his lord, which appears to be a giant worm. He then captures Ghita and brings her to it, trying his hardest to resist the urges he feels by carrying around her naked body. This part ends just as his lord approaches the passed out Ghita.

Last is the first part of a new series, "Baby Makes Three!" by Abel Laxamana (art) and Kevin Duane (story). This interesting new story starts with an extended history lesson about the discovery of the outer planets in our solar system. An unknown entity in the universe, called 'Baby' is discovered in space. Our hero, Turner is about to go on leave when he is summoned to be sent out into space to encounter 'Baby'. Along with his ship mate, Kelly, he heads outside our solar system and they approach a large space station called George Peterson Field.
Posted by Quiddity at 9:35 AM