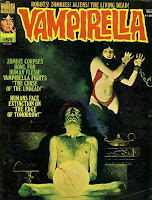 Enrich provides the cover for this issue of Vampirella, which is miscredited to Sanjulian.

First is "Rise of the Undead" by Howard Chaykin & Gonzalo Mayo (art) and Mike Butterworth (story, credited as Flaxman Loew). In this story Vampirella and Pendragon visit a town where each year corpses start plauging the town. It incidently ends up being the night that they are there. It ends up that the corpses have come out due to a curse a man placed on the town. Vampi tries to get the man's descendant to end the curse. While he refuses, eventually things work out okay. This was Chaykin's sole Vampirella story, but his artwork is barely noticable here.

Second is "The Edge of Tomorrow" by Zesar (art) and Gerry Boudreau (story). This story takes place in a future where the communists have taken away and stripped humans of pretty much all their rights. Children are manufactured in a facility run by humanoid robots. A man and woman try to have a baby the natural way, which is now outlawed. They try to steal a drug that will cease them from being sterilized so they can have a kid, but the robots there simply activate a device implanted in their head that kills them instantly. Years later all humans revolt against the robot government until all of humanity is wiped out.

Third is "Uncle Wiggly's Magic Box" by Leopold Sanchez (art) and Bill Dubay (story). This story features a kid's book author nicknamed Uncle Wiggly who passes away. At his funeral he comes out of his coffin awake. While he has died, he refuses to be dead and through will alone keeps himself alive. Since he's really dead however he starts to decompose, and is eventually required to spend all his time in bed, dictating his book to his assistant.

Fourth is "Whitechapel" by Auraleon (art) and Gerry Boudreau (story). In a town where a jack the ripper style killer is running amok, a man is hired by a woman to find her sister. The man investigates a local doctor, thinking he's a lead, and finds the sister, dead. When he goes to tell this to the woman who hired him however, the dead sister suddenly turns up alive again. Our protagonist eventually finds out that the doctor is bringing dead people back to life, but is forced to kill them since the experiment isn't perfected yet. Our protagonist is killed by the doctor, and brought back to life, hoping for him to be the first successful experiment.

Fifth is "The Castle, the Dungeon and All by Vicente Alcazar (art) and Gerry Boudreau (story). This story features some knights and magicians battling each other in the woods. One ends up being victorious and continues on, finding a modern looking building. An odd ending, but some extremely good art by Alcazar, channeling Luis Garcia's style here.
Posted by Quiddity at 5:17 PM