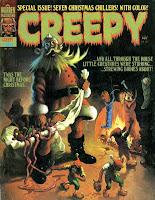 This issue is a Christmas themed issue of Creepy, featuring a cover of an evil Santa with various body parts around the fire place. Another rather horrific back cover by Sanjulian, featuring a man with a nail through his neck. Some very good stories here and some rather dull ones as well.

First is the issue's only non-Christmas themed story, "The Stars My Salvation" by John Severin (art) and Doug Moench (story). As explained in later issues, one of the stories, "Once Upon a Miracle" missed the deadline and got replaced with this story. That story would be reprinted in Creepy 77, the next year's Christmas special. This story takes place in the Civil War where some union soldiers come across a hospital which the leading officer wants to attack. One of his soldiers doesn't want to attack a hospital, so the officer kills him. A similar scenario takes place in space, where an alien hospital ship carrying a device which can heal people heads after a damaged ship, hoping to destroy it. The alien captain attacks the doctor on the ship who doesn't want to attack. In both cases it ends up being an ambush, and the aggressive attackers are totally wiped out. The alien doctor manages to escape and heads down to the Earth where he is going to heal the head officer, but the officer instead kills him, and dies seconds later.

Second is "Christmas Eve Can Kill You" by Vicente Alcazar (art) and Gerry Boudreau (story). A number of different stories occuring around christmas time in this one, including a man trying to kill himself being saved by another person and a shootout among crooks and cops.

Third is "Reflections in a Golden Spike" by Martin Salvador (art) and Gerry Boudreau (story). An old man who is a retired train engineer befriends a young orphan runaway who passes out near the abandoned train that he lives in. Eventually however a pair of thieves arrive. When the boy kills one of the thieves he is killed, so the engineer kills the other with a golden railroad spike he had given to the boy.

Fourth is "Anti-Christmas", this issue's color story, by Rich Corben (art) and Gerry Boudreau (story). This story features a young couple where the husband is actually a satanist, and they give birth to the anti-christ. Meanwhile her father, a priest, goes on a rampage, doing all he can to stop the anti-christ, including innocent babies and people. They eventually converge, and the priest kills his own daughter, then is killed by her husband who proclaims that the priest did the work of Satan a lot better than he could.

Fifth is "A Gentle Takeover" by Adolfo Abellan (art) and Budd Lewis (story). This story takes place in a future where Christmas is outlawed. An older man, Oliver Cubbins, who looks like Santa Claus organizes a peaceful march of believers in Christmas.

Sixth is "Christmas Visit" by Isidro Mones (art) and Budd Lewis (story). An old diner owner, Archie, has a rather bad attitude about christmas. He is visited by a mysterious stranger who arrives at his diner right around closing time. While walking around talking to the stranger, who tries to get him to get a better attitude about Christmas, the man causes various miracles to happen, like curing a crippled boy and talking a suicidal man from not killing himself. While the stranger is able to convince Archie that Christmas is good after all. Unfortunately for him, the stranger is murdered by muggers minutes later.

Last is "The Christmas Gnome of Timothy Brayle!" by Leopold Sanchez (art, his Creepy debut) and Budd Lewis (story). The poorest story in this issue, it is about a man who dislikes his wife who encountersa gnome that gives him the christmas present of his wife's now dead remains.
Posted by Quiddity at 4:31 PM