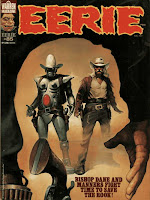 The third Rook cover in four issues on this cover, by Ken Kelly, featuring Bishop Dane and Manners.

First is the Rook in "Lost to the Land of Nowhen" by Luis Bermejo (art) and Bill Dubay (story). The Rook returns to the past once again to investigate the robot and lab he found in the prior story. He accidently causes an explosion which not only destroys the robot he found there but also loses his chance to return to the past in time and vanishes. Bishop Dane and Manners head back to the past just as the Rook vanishes. While Manners works on repairing the robot, Dane changes the past by buying the property where the lab is and sending a letter to Jan and Kate in the present.

Second is the finale for Hard John's Nuclear Hit Parade, "Gonna Nuke Mankind right Outa My Hair" by Jose Ortiz (art) and Jim Stenstrum (story). The Catlicks, Protsnts and Red Threats are all heading towards John's nuclear weapons site to get their hands on the nukes. John and Tarara visit a church then prepare for Zinger's arrival. John outsmarts everyone by launching all his nuclear weapons into the ocean except for one, which he aims right at his base just as everyone is arriving, a blast powerful enough to destroy all the armies left in the world. A pretty good finale to this serial, even though John and Tarara are clearly going to perish when the bomb hits.

Third is the next Gaffer story, "First Wish" by Leo Duranona (art) and Roger McKenzie (story). Gaffer and Jaime go to see Wildcat, an old friend of Gaffer. Wildcat is a former boxer who is blind due to an altercation with some organized criminals after he refused to throw a fight for them. Now all he has left is his daughter Amy, who is dying of an illness. Using his first wish Gaffer enables Wildcat to see his daughter one last time and die in her place when the Grim Reaper arrives.

Fourth is "Blackstar and the Night Huntress" by Esteban Maroto (art) and Gerry Boudreau (story). This story starts off interesting, telling of an intersteller war caused due to a device that measure's peoples potential achievements in life and wipes them out if they're not going to be successful. Alas, thats only the first of 8 pages, the rest of the story has to do with Blackstar, a pilot who crashes onto a planet and meets Rowena, a huntress. They flee various enemies and encounter a "high counsel" that turns them into a reincarnation of Adam and Eve. This story would have a sequel many years later in Eerie 128.

Last is the finale of The Pea Green Boat series, "Dutchman" by Leopold Sanchez (art) and Budd Lewis (story). A rather abrupt and poor finale to what ended up being a rather poor and pointless serial. Al and Eric come across a ghost ship that they're able to get supplies from, later they battle scavengers on it and encounter a ghost.
Posted by Quiddity at 6:06 PM