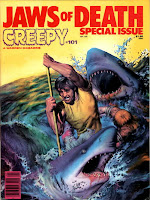 Richard Corben provides the cover for this issue, a 'Jaws of Death' special issue. This cover appears to have been originally intended for issue 83 from 2 years earlier, but didn't make its first and only appearance until this issue. A very strong first story (which is a reprint), but other than that this isn't all that great an issue.

Up first is "In Deep" by Richard Corben (art) and Bruce Jones (story), a reprint of the classic story from Creepy 83. Given that this cover was originally intended for this story, they reprinted it here, and made a sequel story which follows this story. This story tells of a husband and wife whose yacht sinks. The two of them are stranded in the water with just an inner tube to keep them afloat. Over the night the wife drowns, leaving the husband on his own. To his horror seagulls and soon sharks arriving trying to eat her corpse. He fights them off as best he can, but can't stop them all. When he's finally rescued all thats left is her heart, which he grasps tightly in his hands. An extremely good story, one of Creepy's best ever, although this particular version isn't in color, which definately helped it out tremendously in its original printing.

Next is "In Deep II" by Leo Duranona (art) and Bruce Jones (story). The man from the prior story is feeling better, and has dedicated his life to killing sharks. A woman from a museum who is looking for a body of a great white enlists his help. He agrees only because she reminds him of his dead wife. They encounter similar situation when their ship sinks, leaving them in shark infested waters, but this time they both make it out okay.

Third is "A Boy and His Thing" by Alex Nino (art) and Bill Dubay (story). A young boy visits a ship captain who is a friend of his. The captain tells him of a giant tentacled creature they fought and killed at sea. He brought back the baby of the creature, which he gives to the boy.

Fourth is "Waterbabies", this issue's color story, by Pablo Marcos (art) and Louise Jones (story). A group of people go after a group of humanoid sea creatures who were bred to be servents, but escaped. They try to capture the creatures but all end up being killed except for one, which is taken captive by them.

Fifth is "The Seven Sisters of the Sea" by Alfredo Alcala (art) and Gerry Boudreau (story). A pirate ship attacks another ship including a man on the ship who curses them. They later find seven sisters on a boat who they let aboard until they have their way with them, then send them out. The ship is later destroyed, but the surviving member finds a ship, the very ship they attacked earlier which is filled with ghosts that get their revenge. In modern times a ship ran by a drug maker heads to the same region and disappears.

Last is "Alternate Paths" by Pepe Moreno Casares (art) and Chris Adames (story). In a futuristic society a man invents a time machine, but the council in charge of things refuses to let him use it to avoid him screwing up time. He goes against their wishes and uses it anyway, and while back in time he kills a large manta ray. This results in effecting the future, resulting in the destruction of his society, Atlantis.
Posted by Quiddity at 6:34 AM