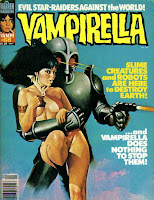 Enrich, as usual provides the cover for this issue of Vampirella, showing Vampi being held by a robot.

First is "Orphee, Poor Orphee" by Jose Gonzalez (art) and Bill Dubay (story). Vampi is in Hollywood making a movie where a number of robots are coming after her. At the same time a scientist who lives nearby has created a bizarre looking tentacled creature, Orphee, who is accused of being a cannibal due to recent murders. The creature watches Vampi fighting the robots for the movie and thinking they are real, interferes, fighting them off. It is soon revealed that the murders were committed by someone else, clearing Orphee.

Second is "October Man" by Leopold Sanchez (art) and Bruce Jones (story). Sanchez provides some very nice artwork on this story. Its about a man whose rather apathetic about the boy that his wife hopes to adopt. Meeting an old friend who lost his own kid, he realizes that his potential son is in danger due to a maniac who was the sister of a friend of his who died when he was young. While she kidnaps the boy, she is stopped when the man's friend runs her over. This gives him a new appreciation of the boy.

Third is the final Fleur story, "Night of the Alley Cats" by Ramon Torrents (art) and Gerry Boudreau (story). For those who don't remember Fleur (I covered a story of hers way back in my very first Vampirella review, issue 35), she was a witch who was a backup feature for Vampirella in 1974. This was Fleur's first appearance in Vampirella since issue 50, and was also her last appearance overall. Its a good thing, as this was quite a poor story, not on the level at all of her other stories. Fleur gets involved with the investigation of a murder involved with a gang. It ends up that the man she is seeing is responsible for the murders and through her witchcraft he gets whats coming to him.

Fourth is "By Degrees" by Jose Ortiz (art) and Bruce Jones (story). This story features a man in a mall with his wife doing some Christmas shopping. She goes off on her own to buy something and he waits for her. When she doesn't arrive, he goes looking for her, to no avail. Everything seems strange as he tries to retrace his steps. The place he was waiting for her he can't find. He is unable to make it back to his car. Even his own home is no longer there. The man ends up dissappearing from society. A rather odd story with no explanation for what ends up happening to the main character.

Last is "The Munificent Ali Addan and Son!" by Esteban Maroto (art) and Bill Dubay & Maroto (story). The art on this story is printed sideways, which was the case for a number of Maroto/Dubay stories around this period in this magazine. This story features the son of Ali Addan, who encounters a beautiful woman who has set up a trap for him. He battles a warrior and defeats him, and the woman is revealed to be Ali Addan's daughter. Her mother, a monster appears and kills Ali's son.
Posted by Quiddity at 5:31 PM