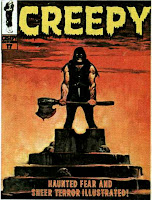 The last Creepy issue of the original Goodwin error before things completely fell apart. Even so things start to fall apart here as this is an average issue, but clearly not as good as the ones that had been coming before this. Frank Frazetta provides the cover for this issue as well as the frontis art for "Creepy's Loathsome Lore", which was originally published in Creepy 2.

First is "Zombie!" by Rocco Mastroserio (art) and Archie Goodwin (story). A pair of men watch a voodoo ritual, but one of the men takes a picture, which causes them to realize their present. His companion is killed, but he manages to escape. When zombies start coming after him, he jumps into what he thinks is salt water, thinking the salt will stop them. Alas, he actually jumped into a river, which is fresh water, and the zombies are able to get him.

Second is "Thundering Terror!" by John Severin (art) and Clark Dimond & Terry Bisson (story). This story was clearly originally intended for Eerie, with Cousin Eerie hosting it. This story is about an old man who tells of his brother, who was obsessed with killing buffalos. One such encounter resulted in the death of a man who was trying to stop him. Over the years our narrator becomes successful and grows a family while his brother vanishes and returns from time to time, always doing nothing but hunting buffalos. An old man, our narrator finds his brother dead after he tries to hunt one last buffalo, and sees the ghost of the dead man on a ledge above him. Like any story told in a western setting, Severin was perfectly suited for this story.

Third is "Mummy's Hand" by Joe Orlando (art) and Russ Jones (story, miscredited to Orlando). This story was originally published in Monster World 2 in 1965. It features the mummy coming back to life, going on a rampage, and eventually being defeated. A rather boring mummy story which had a companion story run around this same time in Eerie.

Fourth is "Heritage of Horror" by Donald Norman (art) and Archie Goodwin (story). A young woman has horrific visions of her husband as an axe murderer. She finds out the truth, that he isn't one, but it ends up he's a hangman instead, and makes her his next victim.

Fifth is "Image in Wax!" by Tom Sutton (art) and Archie Goodwin (story). This was Sutton's Warren debut. A man is jealous of a competitor's ability to create realistic, but horrific wax creatures. He decides to murder the man by setting the place on fire, and kills him, but the man melts, revealing him to be a skeleton covered in wax. The competitor was actually brought back from the dead to watch over the wax figures, who are actually real monsters, and with him dying the monsters force the killer to take over taking care of them, making him a wax man too.

Sixth is "A Night's Lodging!" by Maurice Whitman (art) and Rhea Dunne (story). This story is about a man who is confronted by vampires after getting into an accident with his carriage. He tells them if they let him live he'll build them a hotel and bring many victims to him. He does so, but is eventually turned into a vampire himself. A very lame rehash of "The Invitation" from Creepy 8, which had Whitman as one of the writers.

Last is "The Haunted Sky!" by Roger Brand (art, his Warren debut) and Archie Goodwin (story). A pilot encounters his dead colleagues while aflight in an experimental airplane. Although the doctors don't initially believe him, there is proof left behind of the ghost's existence.
Posted by Quiddity at 3:51 PM

I was just a boy back in the 60's and started collecting Creepy Magazine from the very first issue. I loved the greatly! Loved the Archie Goodwin era.