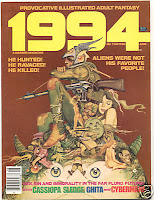 This issue of 1994 features Jose Bea's only real cover for Warren (his other cover, Eerie 75 was actually just a colored panel from a story of his). Its a really good cover, but unfortunately was Bea's only work at Warren between 1977 through 1983.

First is "Imaginary Lover!" by Alex Nino (art) and John Ellis Sech (story). A spaceship carrying 500 embryos, which are to be used as laborers is hit by a meteor and crashes into a foresty planet. As a result all of the embryos are killed but one, who is taken care of by Servo, a robot. Marx, the embryo, quickly grows up but longs for a woman. When one suddenly appears they have sex but Servo reveals that it is actually a figment of his imagination that Marx has turned into reality. Marx's thoughts also create a monster, that ends up killing Servo. Marx defeats the monster and kills the woman too, blaming her for Servo's destruction. While some investigating it afterwards don't believe he really created the woman or monster, the discovery that he has V.D. lends some credence to them being real.

Second is "Cyberman" by Delando Nino (art) and Rich Margopoulos (story). In the future people are able to live longer by transporting their bodies into androids. One such android man finds his wife harrassed and murdered one day, so he goes on a quest to destroy those that killed her.

Third is "The Crop!" by Jose Ortiz (art) and Bill Dubay (story). Another over the top, disgusting story by Dubay. this story takes place in the future after a famine and rough winter causes many to starve. A new food source arises that saves humanity, cloning. This story takes place from the perspective of one of the factory workers. While claimed to be cloned beef, the clones instead look exactly like human babies. Eventually after multiple pages showing these 'babies' being carved up, disaster happens as tapeworms ruin the supply of clones and all are destroyed. The main character, overhearing some scientists, hears them say that the clones were human all along and were used to get humans to get used to eating human meat. Discovering him listening, the scientists put him on the assembly line to use for food. While an interesting story, the fact that so much of it features carving up human babies to eat and the sheer ignorance of the main character to realize that they are humans is a severe flaw.

Fourth is the fifth story in the "Starfire Saga" series. Art is by Rudy Nebres and story is by Bill Dubay. Chris is dropped off by the pirates on a new planet where she is rescued from an octopus by a man named Sledge. They find a spider nearby that has killed Chris's friends, Snuffy and Drago. A short story this time at only 6 pages.

Fifth is "Ghita of Alizarr", the sixth story in this series. Art and story are both by Frank Thorne. Continuing from the previous story, the evil priest Sef brings Ghita before his God, Drill, who appears to be a giant worm. When Thenef and Dahib arrive and Ghita is knocked into the chasm that Drill came from, it is revealed that what we saw was actually just a tentacle of Drill, who looks like the inside of an oyster. Dahib beheads Sef and Thenef manages to control Drill using the gem he has. Planning to use Drill to help them in their battle later, Ghita and their troll underlings head off the battle.

The issue concludes with "Voyage to the Bottom of the Barrel" by Abel Laxamana (art) and Budd Lewis (story). A very over the top, racist story, it features a professor who states that black people are descended from neanderthals and whites are so much better than them that they must be aliens. This results in a war where white people try to exterminate all the black people on Earth, led by President Jimmy Carter. When aliens do arrive, it ends up that it is actually black people who are aliens, not white people. This story combined with 'The Crop' makes this arguably the most offensive issue Warren ever published.
Posted by Quiddity at 3:46 PM