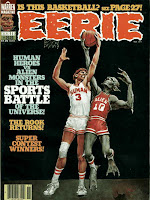 A sports themed cover by Don Maitz starts this issue of Eerie.

First is the Rook in "Future Shock" by Luis Bermejo (art) and Bill Dubay (story). The Rook appears once again, in the devestated future. Meanwhile Gat Hawkins finds a way to come to the present, where he battles Bishop Dane and Manners. The Rook meets a robot who brings him to the last living human on Earth, who thinks the Rook is evil and attacks him. The Rook battles him and defeats the man, who is revealed to be a machine man as well. A very good story, the best Rook story so far!

Next is the latest story in the Scallywag series, now retitled The Black Demon's Sword. This story is called "The Key", but Jose Ortiz (art) and Budd Lewis (story). The ninja captured in the prior part escapes. Lubus heads after her and encounters more enemies while Sullivan encounters a sea creature.

Third is "Deathball 2100 AD" by Dick Giordano (art), in a rare solo story for him, and the team of Bill Mohalley & Nicola Cuti (story). This story is about a basketball game between humans and humanoid fish men. One of the human players, told that he is being forced into retirement after this game, goes on a rampage and kills many of the opposing players during the game.

Fourth is the first of a two part story, "Boiling Point" by Leopold Sanchez (art) and Bruce Jones (story). This story tells of a mysterious killer in the subway who has pushed an old woman into an oncoming subway car. The story focuses on one of the cops investigating the case and one of the witnesses, whom he starts a relationship with.

Last is "Junkyard Battles or Never Trust an Electric Shaver" by Auraleon (art) and Nicola Cuti (story). Plutonium has caused machines to come alive and fight humanity. This story focuses on a soldier who battles the machines who is done in when his gun is exposed to plutonium and fires on him.
Posted by Quiddity at 6:37 AM