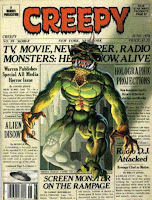 The cover for this issue is by Atilla Heije. This is an all media horror issue.
First is "The Alien Factor" by Jose Ortiz (art) and Budd Lewis (story). This story is about some reporters investigating an alien presence. They face some people trying to cover things up, and government forces evenutally arrive and investigate, telling everyone that the presense was nothing more than fungus.

Second is "Helen Horror Hollywood" by Leo Duranona (art) and Gerry Boudreau (story). This story tells the tale of a girl who was interested in nothing but movies growing up, who eventually went to Hollywood and became famous. The theatre she stayed in however housed a monster that killed a former lover of hers, and eventually her as well when she returns to it.

Third is "Graveyard Shift" by Leopold Sanchez (art) and Bruce Jones (story). This story features a radio DJ on the graveyard shift who receives threatening calls from a man who tried to kill him and his fiance. His fiance is attacked and the DJ finds that it is actually his enemy's brother, as his enemy died in prison. Luckily, the attacker is electocuted when he steps in a puddle, saving our protagonist.

Fourth is "Starlet, Starlet, Burning Bright" by Carmine Infantino & Dick Giordano (art, miscredited to Ramon Torrents) and Gerry Boudreau (story). The issue's best story, this is about a woman who meets a former soldier who starts stalking her. He is the son of a famous man in Hollywood, so she is unable to do anything about him. She recruits an old lover to help him, but when the stalker tries to blow him up, she ends up dying instead.

Last is "The Image Makers" by Jose Ortiz (art) and Nicola Cuti (story). This story is about a pair of men working on a device that projects a person's image. They try to get money for it by swindling an old woman, convincing her through a seance that her dead daughter has come back to life. They do this by getting a friend of there's who looks like the dead daughter to pretend to be her. One of the men wants her to kill the old woman because she'll inherit the money, but instead he is done in when someone projects a bridge to appear over a gap. It ends up being set up by the old woman, who knew of their scheme all along, having been the funder for their device.
Posted by Quiddity at 3:45 PM