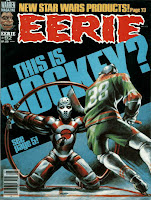 This issue has a sports themed cover by Kim McQuaite, featuring the opening story.

First is "Cold Sweat" by Jose Ortiz (art) and Bill Dubay (story). A pair of hockey players traveling in space are brought to a iceberg shaped asteroid where they are forced to play hockey with a number of robots. It ends up that the robots are controlled by an alien whose planet they were to play in their next match. By shooting a puck at his hidden lair, they are able to destroy him and escape.

Second is the Rook in "Strangers in the Strangest Places!" by Abel Laxamana (art) and Bill Dubay (story). An alien, Organ Lo who is a big fan of the Rook desires to be in the old west with him, so he transfers himself back in time to that very location. There he is helped by an old woman, Granny Fincher who demand so much money from him that he has to resort to becoming a crook to pay her back. This is the first part of a two part story concluded in the next issue.

Third is "Lets Hear it For Homo Sapiens" by Auraleon (art) and Gerry Boudreau (story). This story was originally intended for Creepy 95's apes special. This story tells of a revolution of evolved animals and a young girl that befriends one of the intelligent chimps during their battle.

Fourth is the second Moonshadow story, "Suzanna, Don't You Cry" by Jose Ortiz (art) and Bob Toomey (story). In this story Moonshadow wanders through the desert, finding 'The City of the Changer', which is actually a secret underground lair. There he finds Suzanna, a lover and mentor from his childhood when he became an assassin. Suzanna looks exactly as she did back then. Through flashbacks we find that Moonshadow ended up killing her when she was ordered to kill him. Suzanna takes off her clothes for him, then completely rots away, causing him to become comatose.

Fifth is a new series, Abelmar Jones with "Bad Day 'Cross 100th Street" by Alex Nino (art) and Bill Dubay (story). this story tells of two inner city youth who go to work for a wizard, resulting in the typical number of bizarre looking monsters showing up. Not very good, but this series would continue on for a while.

Gaffer's long awaited conclusion ends the issue in "Final Wish" by Leo Duranona (art) and Roger McKenzie (story). A rather unexpected, but still good conclusion for this series. Infact this might be the most depressing ending a series in Eerie ever had. Gaffer dies of old age and leaves his third and final wish to Jaime. Many years pass, Jaime is now an old man himself, living in a mostly abandoned New York in the midst of a devastating winter. Even worse, news of a war soon comes. Jaime rushes to the old slip of paper where Gaffer left him his wish only to be shot by looters. Jaime wishes for peace on earth just as a nuclear weapon strikes New York, causing a blinding white light that engulfs Jaime and everyone else. The true conclusion to this series appears left to the reader's interpretation. Did Jaime's wish for peace on Earth occur due to everyone being wiped out? Or was the light signalling the end of the devastating winter? Alas, this was it for this series so we'll never know. A minor blooper by the production department in this story, with the "End" logo appearing on the second to last page.
Posted by Quiddity at 7:50 PM