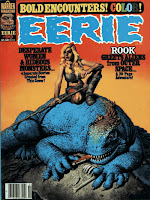 This issue of Eerie is a special issue based on the cover painting by Richard Corben, featuring a beautiful woman sitting on top of a large blue lizard. All of the non-Rook stories in this issue are based on this cover. Another story originally intended for this issue appeared in Creepy 96, which came out a month after this issue. This is a very consistent, fun to read issue, continuing a pretty strong run from Eerie at this stage in its existence.

First is "Carrion" by Gonzalo Mayo (art) and Gerry Boudreau (story). A beautiful girl travels across the wilderness with a large monster who was transformed into that form by a wizard. The wizard sends various monsters after them, all which fail to stop them. The two of them search for another wizard that can turn him back to human, but find that he has died already. Hungry, in a wintery setting, the monster sacrifices himself and lets the girl eat him to stay alive.

Second is "The Show Must Go On!" by Leo Duranona (art) and Roger McKenzie (story). This story is about a girl who departs the circus that she's in with Tolk, a large monster. She heads to a bar and agrees to sleep with a man to earn some money, but Tolk goes crazy and kills him. It ends up he had a price on his head, so they make some money out of it, and become sheriff of the town.

Third is this issue's color story, "A Woman Scorned" by Richard Corben (art) and Bruce Jones (story). Corben's color in this story isn't as good as usual. This story features a girl and the talking blue lizard she travels with in a desolate world, who keeps trying to get her to remember things, which appears as soon as she does. This includes a car, a house, trees, etc... We head to the past where we learn about the girl's childhood and her ability to cause anything she want to happen. She is soon able to get everything back to normal, including turning the lizard back into her boyfriend, but when she remembers him cheating on her, she resets everything to nothingness once again.

Fourth is "The Fianchetto Affair or: A Matter of Great Delicacy" by Jose Ortiz (art) and Bob Toomey (story). This story takes place sometime in the future, where dinosaur like aliens have come to Earth with humans viewed as food! This story focuses on one of those aliens, who takes a liking to one of the humans, a girl named Fianchetto. She escapes with Fianchetto after resigning from her job and they head to the ruins of New Jersey where she rescues Fianchetto from some human savages, but they are captured and she eats Fianchetto soon afterwards, having learned the errors of her ways.

Last is this issue's Rook story, "What is the Color of Nothingness?". For the first time, someone other than Bermejo draws the Rook, here Alex Nino. Story is by Bill Dubay, as usual. The Rook decides to head to the beginning of time. When he gets there however, he finds many aliens there as well, so many that some start fighting. The Rook meets some friendly aliens who try to stop the fighting and reveal that they harness a great amount of energy from the expanding universe. Another universe nearly expands into ours, but stops just before they come together, avoiding disaster. The Rook returns to the present, where Bishop Dane has been hard at work trying to create robot companions for Manners. Some very good art by Nino and a better than average story by the Rook, which has been very good for three straight issues now.
Posted by Quiddity at 7:50 PM