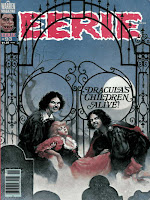 A very good Don Maitz cover starts off this issue of Eerie.

First is the Rook in "Strangers in the Strangest Places" by Abel Laxamana (art) and Bill Dubay (story). An uncredited Alfredo Alcala draws the first two pages. This story continues on from the previous issue, where the alien fan of the Rook, Organ Lo is in the old west, being forced to rob people to payback the evil Granny Filcher. The Rook & friends interfere, revealing her as the true evil one, and allowing Organ Lo to return to his original time.

Second is "Honor and Blood", a new series by Leo Duranona (art) and Nicola Cuti (story). This series was one of Eerie's best series around this time of its existence. This story tells of a pair of brothers who were born from their dying mother and discovered in her coffin, eating her. The boys grow up and mysterious murders start occuring. One of them is obviously a vampire, although he is able to cure his vampiric impulses and eventually go to college, marry and have a daughter. His brother acquires bodies for him, but eventually admits that the brother was blacking out and killing them, and that he's a ghoul. The brothers kill themselves, but the daugher appears to have vampiric tendencies herself...

Third is the finale for Moonshadow, titled "Kingdom of Ash" by Jose Ortiz (art) and Bob Toomey (story). Moonshadow, who quickly recovers from the previous story and is introduced by Suzanna and a tentacled creature to the Changer, which is actually a giant machine storing an epic body of knowledge and possessing magical powers. The Changer transfers its power into Moonshadow, giving him tremendous powers, enough to recreate the desert he is stranded in. A very interesting story to conclude this interesting series. About 10 issues or so later a new series would start starring this character.

Fourth is "The Einstein Factor" by Pepe Moreno Casares (art) and Casares & Nicola Cuti (story). In this story a jet pilot lands his jet in a body of water and gets out, traveling around a bizarre landscape in his raft. He eventually climbs aboard the rocky land around him, finding a weird cushiony ground and large worms chasing him. It ends up that he has shrunk and is wandering around the skull of a dead animal. The letter pages raged with letters about this story for months afterwards.

Last is the latest Abelmar Jones story, "The Slime Creature of Harlem Avenue" by Alex Nino (art) and Bill Dubay (story). Abelmar and his brother Stanley rob a home where they find an egg, which hatches, causing a blobish creature to come after them.
Posted by Quiddity at 3:53 PM