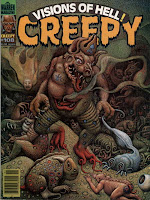 Terrance Lindall provides a fine cover for this issue, his first for Warren. Unfortunately there's not much fine work inside this issue. In fact this may be the single worst issue of Creepy I've reviewed to this point. While there's a few good art jobs here, the stories here are all absolutely dreadful. Please pardon the very short summaries.

First is "Hole in the Head" by Alex Nino (art) and Frank Salvatini (story). This story tells of a man in an insane asylum who claims he's not crazy, but tells a story about monsters he encountered. Some terrific, surreal artwork from Nino but a very confusing nonscenscial story.

Next is "Camelot Crosstime" by Val Mayerik (art) and Jean Michel Marin (story). This very boring story takes place in a medieval setting. That's all I've got to say.

Third is "Sultana" by Pepe Moreno Casares (art) and Budd Lewis (story). Another dreadfully boring story, it tells of a battle and the important part that a woman named Sultana takes in it.

Fourth is "Going by the Book" by Alfredo Alcala (art) and Kevin Duane (story). This story is about a fat demon and the wizard that he serves. Despite being credited to Alcala, this looks nothing like his usual work, making me wonder if it was really Alcala who drew it.

Fifth is "House of Magic" by Pablo Marcos (art) and Gerry Boudreau (story). This confusing story tells of a man who moves into a house with a painting of a magician who defied death. Various magical stuff happens, and the house is destroyed.

Last is "Hell's Playground" by Leo Duranona (art) and Jean Michel Martin (story). Devils from hell suddenly arrive in a man's backyard one day. The various things he tries to do, like bringing a priest doesn't help. Eventually he gets them to leave by building a playground.
Posted by Quiddity at 7:32 PM

A correction: The Creepy 108 story "Hell's Playground" is credited to writer Jean Michel Martin, but that was a printing mistake. The script actually is by Pierce Askegren, who also wrote a couple of other Warren mag stories, several Marvel prose novels, and short stories that appeared in Marvel anthologies.