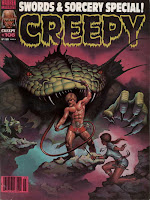 Romas Kukalis provides the cover for this issue of Creepy, his Warren debut. This issue is called a swords and sorcery special, although as you'll see within, only half the stories have the swords/sorcery theme.

First is "Quimby the Barbarian" by Pablo Marcos (art) and Bob Toomey (story). This story tells of a man who uses a dream device to become a barbarian, battling other dreaming people. He battles a powerful sorceress who manages to defeat him, and upon returning to the waking world realizes that its his wife!

Second is "Fangs" by Leo Duranona (art) and Laurie Sutton (story). Duranona uses both real photos and his own drawn artwork in this story. A group of mermaids are brought to be entered into 'the shark cult', but upon arriving there realize that it is actually a den of vampires that kill all of them and feed their corpses to sharks. One of the mermaids survives, but is made a vampire herself. She convinces her fellow mermaids to kill all the remaining vampires. She then flees to above the water to escape, where she is soon found by a human.

Third is "Swords in the World Series" by Jim Starlin & Joe Rubenstein (art) and Ken Gale (story). Two sorcerors battle each other and one of them is victorious. The loser tries to escape by going back in time to the present. There he learns about baseball and becomes a player on the Yankees, making them very successful, within one win of the championship. At that time however the winning sorceror arrives on the scene, to have a one on one battle with him this time. Both are transported away, with one of the henchmen recruited for baseball as well.

Fourth is "Primal Equation" by Isidro Mones (art) and Budd Lewis & Jon Sinsky (story). Two soldiers from opposing sides of a large scale war, the only survivors, discover a space ship collecting bodies. Thinking this must be occupied by aliens, responsible for the fighting, they board the ship and inside find a giant embryo, being fed the corpses. One of the soldiers destroys it, but the scientists there, who are fellow humans, reveal that the creature was to be a new breed of human, one that would have kept the world peaceful.

Fifth is "Sudden Death Playoff" by Pepe Moreno Casares (art) and Bob Toomey (story). This story tells of a one on one golf game between a human and alien, with the survival of the Earth at stake. The human is able to beat him in golf and in a duel when the alien pulls out a sword.

Last is "The Art of Killing" by Val Mayerik (art) and Larry Hama (story). A samurai is trained by his elderly father and three uncles. One day a notice from their lord arrives, resulting in the samurai having to kill his uncles to keep his life. He then battles his father and kills him as well. This story would become a new series in Eerie titled "Samurai" shortly after this issue.
Posted by Quiddity at 7:47 PM