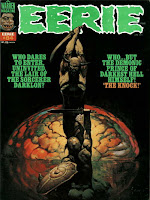 This issue of Eerie features a reprinted cover by Frank Frazetta originally used for issue 8. This was the first ever reprint cover for Eerie, which would become quite common over the next few years.

First up is the latest Rook story, "Yesterday, the Final Day" by Luis Bermejo (art) and Bill Dubay (story). The Rook, after bringing his great great grandfather Bishop Dane to the present (which originally happened in the first Rook story) goes back in time to get his revenge on Gat Hawkins. Gat Hawkins gets the better of him however, shooting him and leaving him for dead. Luckily the Rook isn't dead, and is nursed back to health by Kate, introduced in the prior story, and her friend Jan. Jan manages to sneak into Hawkin's home and make it to the Rook's Time Castle and bring it back to the present. Bishop Dane then heads back into the past and helps the Rook get revenge on Hawkins. Heavily injured, the two are nursed back to health by Kate and Jan, who decide to come to the present themselves for good. The best of the Rook stories so far, with Bermejo's art also quite good on this story.

Second is "Brass Monkey", the latest Hard John Apple story by Jose Ortiz (art) and Jim Stenstrum (story). Ortiz uses a new art style in this story, which results in his art looking a lot like Alfredo Alcala's. John and Tarara go to a Catlick base in order to get plans to assist in John's attack on the world. There it is discovered that Zinger, the man who originally told John about the nukes in Kansas is a member of the Catlicks, Protstnts and Tarara's group. He plans to finish off our heroes, but the General (the orangutan introduced in the prior part) arrives and helps our heroes escape.

Third is a sequel to issue 68's Godeye, "Goodbye, Yellow Brick Road" by Carmine Infantino & Dan Green (art) and Budd Lewis (story). I wonder why they didn't use Leopold Sanchez for this story, the artist for the original story, as he was at Warren at this time. Godeye is recruited to be a hero again, this time on the world Elton where he is there to rescue a princess from the Rhode, a large sphere which is controlled by a powerful giant. Godeye outsmarts the giant by challenging him to a digging contest, which is filled with water due to hitting a well. Godeye then manages to drown the giant by throwing a rope around his neck and dragging him into the water. His reward is the Rhode itself, which is made out of gold. This story would be Godeye's final appearance.

Last is "He Who Waits in Shadow" by Jim Starlin (story & art). This is a very surrealistic 6 page story that features Darklon making a guest appearance on the final page.
Posted by Quiddity at 4:14 PM