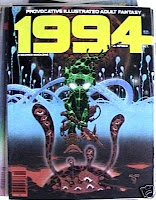 Alex Nino provides the cover for this issue, featuring the Starfire Saga. He is credited as "A2-120".

First is "Spearchucker Spade, Intergalactic Eye" by Alex Nino (art) and Bill Dubay (story, credited to Will Richardson). Spearchucker Spade is an out of work detective who is hired by a woman to help find an assassin going after her father, Goldenrod. Spade fails to rescue him and he is killed. The killer ends up being his harem, which is actually a tentacled monster. The monster is defeated, but Spade ends up actually being an engagement present to the woman's fiance, who wants to beat him up. A rather drawn out, slow moving story. Dubay yet again shows potential racist tendencies by calling the main character 'Spade'.

Second is "Coming Out Party" by Delando Nino (art) and Rich Margopoulos (story). A tentacled alien tries to get even with a girlfriend who dumped him by summoning a demon. The demon ends up going too far, killing her, then tells the alien that its going to have to become his servant as soon as he leaves the pentagram he's standing in.

Third is "The Missionary" by Carlos Giminez (story & art). This story was originally published in Europe and is reprinted here. Giminez was a terrific artist who unfortunately never actually worked for Warren, although he did have four stories reprinted in Warren magazines. The issue's best story, this is about a missionary who comes to a planet of very friendly, kind, cute aliens. He tells them about religion, eventually getting to the subject of martyrs and their horrible deaths. Thinking they are helping him get to heaven, the aliens brutally torture and murder him in the manner that all the martyrs he talked about died.

Fourth is the sixth story in "The Starfire Saga" by Rudy Nebres (art) and Bill Dubay (story, credited to Will Richardson). Continuing the very boring storyline, this story is about Chris's father going around killing people with the help of the creature on the cover. Boring, very boring.

Fifth is the third story in "Baby Makes Three!" by Abel Laxamana (art) and Kevin Duane (story). This serial continues to go pretty much nowhere, focusing on the astronauts investigating a case and finding someone dead.

Sixth is "1894" by Alex Nino (art) and Budd Lewis (story). A man finds himself in a bizarre white landscape with lots of little white balls around him. He tries to get out by lighting them on fire. It ends up that he was in a crash which caused him to think that he was in this mysterious landscape. A rather poor story but some very good art by Nino.
Posted by Quiddity at 3:39 PM