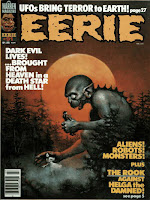 A terrific cover by Don Maitz starts this issue of Eerie.

First is the Rook in the absurdly titled "The Incredible Sagas of Sludge the Unconquorable, Helga the Damned, and Marmadrake, the Magnificent!". Its done by the usual team of Luis Bermejo (art) and Bill Dubay (story). After a number of good Rook stories, the series starts to lose some of its luster in this rather poor, overcomplicated story. Three stories are going on at once here. In one, the Rook is taken over by an evil alien brain and forced to work towards sending weapons to its homeworld. In the second, Bishop Dane goes back in time and encounters some vikings. In the third, Manners and the ladies encounter a robot monster controlled by a mad scientist. Eventually the stories converge and everything comes out okay.

Second is a much better story, "Elijah Arnold and the Angel's Egg" by Leo Duranona (art) and Jonathan Thomas (story). This story takes place a couple of centuries ago, when Elijiah Arnold discovers a UFO that crashed in the woods near his house. Inside the UFO he finds various alien livestock, which he brings to his farm. He breeds one of the alien cows with one of his own, but a horrific monster is born as a result. Eventually the alien owning the livestock returns, and kills Arnold. The alien helps his neighbors bury the creature in one of Arnold's barns using cement. In the present, construction workers attempt to build a highway where the farm is, resulting in releasing the monster.

Third is the second and final part of "Francesca" by Gonzalo Mayo (art) and Bruce Jones (story). Jean's vision of a dead man in Francesca's room appears to be nothing but a dream. She continues to be suspicious of her however, and through some investigating realizes that she is the reincarnation of a woman who died centuries before and has returned from hell. She seeks to get Jean's husband to kill himself, which she'll do as well, resulting in them being together in hell. Luckily a lighting bolt ends up causing a grave to fall on Francesca, killing her.

Last is a new series, Moonshadow, with "Against the Sun". Art is by Jose Ortiz and story is by Bob Toomey. Moonshadow, an old assassin is confronted by the Grim Reaper. Moonshadow tries whatever he can to get the Reaper to spare his life, and the Reaper decides to allow it by having him kill someone else for him. The victim ends up being a sick little boy. Rather than kill the boy however, Moonshadow outsmarts the Reaper and instead kills all the germs in him, making the boy better. Angered by being outsmarted, the Reaper sends Moonshadow to the middle of a desert.
Posted by Quiddity at 5:24 PM