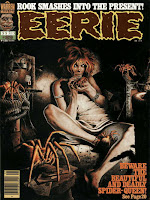 This will probably be my last post until friday or saturday, am going away on business for the rest of the week after today. Anyway, lets get on with the latest issue of Eerie.
This is quite a good issue of Eerie with a cover by Malcolm McNeil, his only work for Warren. For at least a little while Eerie climbs back up in terms of quality after an extended lull period with some more interesting stories, many of them horror themed.

First is the Rook in "Trouble in the Time Factory" by Luis Bermejo (art) and Bill Dubay (story). In this story Bishop Dane and Manners head to a time factory where the Rook had been working with the government. There an android man who was part of a series they were developing runs amock, seemingly destroying Manners. The Rook, back from the future arrives and manages to defeat it. He fixes Manners and tells them what happened to Gat Hawkins, who is now in the future, all alone.

Second is "Crystabelle!" by Leo Duranona (art) and Bill Dubay (story). This story is about a girl who grows up in an attack occupied by spiders when her mother steals her from her adopted parents and hides out with her there. An electrician, finding a malfunctioning power line, discovers her when fixing it. He goes inside and has sex with her, but she kills him and eats him aftewards, as that's all she knows, having seen the spiders do it.

Third is the first of a two part story, "Francesca" by Gonzalo Mayo (art) and Bruce Jones (story). A doctor and his wife adopt a 16 year old girl, Francesca, who was frozen in the past due to cancer and was just recently thawed and cured. While she gets along great with the doctor, Francesca acts very cold towards the wife. One night the wife finds that Francesca has murdered a man, which is were this part of the story ends.

Fourth is the finale to Scallywag/The Black Demon's Sword, "The Magician's Tower" by Jose Ortiz (art) and Budd Lewis (story). With the sword and statue, the magician summons the demon, who is crazed and out of control. A smaller demon with Sullivan is able to stop the demon and the magician is defeated by the ninja agent who had been working for him. Glad to see this rather poor series finally coming to an end.

Last is the finale to "Boiling Point" by Leopold Sanchez (art) and Bruce Jones (story). Our hero is unable to capture the killer, who gets away from him when a conductor interferes. He later meets with his friend, a priest, who says the killer has been coming to confessional. The priest is actually the killer himself, and is struck by a subway car himself, killing him.
Posted by Quiddity at 6:01 PM