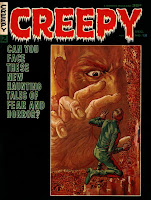 Dan Adkins provides the cover to this issue of Creepy, although it is miscredited to Frank Frazetta. The frontis, "Creepy's Loathsome Lore" is provided by Dan Adkins as well.

First is "Dark House of Dreams" by Angelo Torres and Archie Goodwin (story). An artist moves into the house of Matthew Gaunt, an evil man who was killed by a mob almost 200 years earlier. The artist has a number of dreams where he encounters Gaunt, and other evil beings, which become worse and worse with each one. Eventually he dies and turns into Gaunt, resurrected. Another very good story, as usual from Torres and Goodwin.

Second is "Turncoat!" by Bob Jenney (art) and Archie Goodwin (story). This story features a member of the Union army in the Civil War, who, hoping to escape from battle, puts on the uniform of a dead confederate soldier when he spots some confederate soldiers. The soldiers end up being dead however, and force him to die as well.

Third is "Maximum Effort!" by Rocco Mastroserio (art) and Ron Parker (story). A pair of men open a funeral business and find a lot of success with it. A skeptic thinks he realizes whats going on when he finds that they're grounding the bones of the dead to sell for fertilizer, but find that they also find other uses for the corpse, as they are a vampire and ghoul!

Fourth is "Voodoo Doll!" by Jerry Grandenetti (art) and Archie Goodwin (story). An older man gets a voodoo doll to keep his young wife from leaving him. However, it ends up that it is all a trick by her and her lover. She shows him a voodoo doll of himself, which causes him to die of a heart attack. However, when she disposes of both dolls, it ends up that they worked after all. By throwing the two of them in a fire, she is burned up herself.

Fifth is "Blood of the Werewolf!" by Steve Ditko (art) and Archie Goodwin (story). A man wandering the city in a drunken stupor is found by a psychologist who has a werewolf for a son. The psychologist manages to transfer the werewolf curse onto our protagonist, who soon becomes a werewolf himself. He ends up going to a psychologist to tell him whats going on, but it ends up that the man is actually the son who was originally a werewolf, and shoots him dead with a silver bullet.

Sixth is "Idol Hands!" by Manny Stallman (art) and Archie Goodwin (story). This story is about a large idol statue that is discovered and brought to a museum. It is soon discovered however that it isn't just a statue, and is alive. A so-so story, the weakest in this issue.

Last is "Adam Link, Robot Detective" by Joe Orlando (art) and Otto Binder (story). Adam dons a human disguise in order to investigate some murders that have been accused as having been committed by his robot mate, Eve. A rather interesting twist in this story, with Adam looking like a normal human being for most of it.
Posted by Quiddity at 5:06 PM