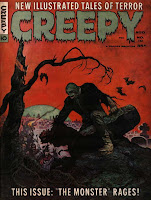 A classic Frank Frazetta cover starts off this issue of Creepy, featuring a green Frankenstein's monster before a mob.

First is "Brain Trust" by Angelo Torres (art) and Archie Goodwin (story). A new doctor in town is perplexed by the town eccentric, a large man who doesn't show up in public often, and smells like shaving cream. Eventually the grocery store owner refuses his business and he dissappears. The doctor finds out that the man was one of a set of mutated twins. Having died in a car crash, his other brother used his brain to control his actions. When the doctor comes upon him, the living twin uses the dead one's body to kill himself.

Second is "Into the Tomb!" by Joe Orlando (art) and Archie Goodwin (story). A group of archaeologists discovers a mummy's tomb, complete with one mummy of a servant and one of a pharoah. One of the archeologists reveals himself to be the pharoah, reincarnated, and destroys the mummy of his original body. The mummy of the servant arrives and the pharoah orders him to kill the others, but it instead wraps him up in wrappings and puts him back in the sarcophagus where his original body had been.

Third is "Monster!" by Rocco Mastroserio (art, his Warren debut) and Archie Goodwin (story). A man awakens in the body of a Frankenstein like monster. He becomes enraged at the scientist who did this to him and grabs him and walks into quicksand, just as the scientist reveals that he needed to do this to save him from a car wreck. A printer mistake causes the 6th and final pages in this story to be switched with one another.

Fourth is "Midnight Sail" by Johnny Craig (story & art, credited as Jay Taycee). Four young men and women go onto a sailboat and are helped by a friendly old captain who tells them a tale of the ship, which was occupied by a vampire which killed most of the crew and was obsessed with piloting the boat himself. In the present day the old captain pilots the boat over a waterfall to his death when a stake goes through his heart. Two of the young people are able to escape unharmed. The narrative of this story is very confusing, making it hard to tell when we depart the past and come back to the present.

Next is "Backfire!" by Gray Morrow (art) and Archie Goodwin (story). A gunfight veteran arrives in a deserted town and meets an old man in the bar, who tells him of a jury thats forming. After the gunfighter tells the old man about his most previous gunfight it is revealed that the 'jury' is actually the ghosts of the men he's killed, who fire upon him. He wakes up, finding its a dream, but soon ends up in the exact same scenario all over again.

Sixth is "Thing of Darkness" by Eugene Colan (art) and Archie Goodwin (story). A man working in the subway encounters a monster in the darkness which is afraid of the light. He is able to escape from the creature when the light of a subway car arrives, but his hair goes white from the fright. The monster still pursues him, but as long as he remains in the light he is okay. Unfortunately for him, the city has a great blackout, and all he has is a single candle which doesn't stay lit for that long...

Last is one of Warren's all time most famous stories, "Collectors Edition" by Steve Ditko (art) and Archie Goodwin (story). The story features Danforth, a man obsessed with the occult who hears of a book, 'Dark Visions' that he becomes obsessed with obtaining. Seeking to spend all of his wife's money on the book, he eventually murders the bookstore owner who told him of it in the first place, who had also committed murder to obtain the book. Reading the book, Danforth finds that it goes long past the time of the author, all the way to the present, and even the future, showing his own death, which shortly comes when his wife buries an axe in his head. Terrific art, terrific story, this is certainly up there among Goodwin's best stories. Ditko's drawing of Danforth's eyes slowly closing across the bottom of each page is also a nice touch.
Posted by Quiddity at 6:00 AM