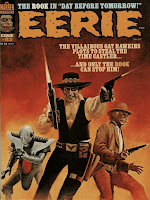 Another cover featuring the Rook starts off this issue, painted by Enrich, a rare Eerie cover for him.

First is the Rook in "The Day Before Tomorrow" by Luis Bermejo (art) and Bill Dubay (story). The Rook accidently brings the outlaw Gat Hawkins with him from the 1830's to the 1870's, where he is forced to chase after a bird that steals part of his time machine. The bird leads him underground where he finds a robot and a lab he can use for himself. Hawkins meanwhile plots to both steal the Rook's time machine and destroy his grandfather Bishop Dane as well through a woman, Kate McCall that ends up double crossing him when she turns out liking Dane. The Rook manages to rescue his grandfather despite the attacks from Hawkins. A somewhat better part than the last Rook story, although you would think that all of the Rook's tampering with history would really screw things up.

Second is Hard John's Nuclear Hit Parade, with the story "Kansas City Bomber". Art is by Jose Ortiz and story is by Jim Stenstrum. Hard John Apple is a character that was originally introduced in Creepy 64 in the story "An Angel Shy of Hell", the very first issue I covered on this blog. For those who haven't caught that original story, this story takes place in the post-apocalyptic future where 'Catlicks' and 'Protstnts' fight each other. Hard John Apple has fooled the Prot leaders into giving him the state of Kansas, which is filled with nuclear weapons which he plans to use with the help of an orangutan. This story introduces Tarara, a woman who captures John and discovers his plans.

Third is another new series, Gaffer in "Temptation" by Leo Duranona (art) and Roger McKenzie (story). This was a very good four part series that was spread out over a number of issues. Gaffer is a poor old black man who befriends a young boy, Jaime. They go to a carnival where Gaffer is quite successful at a wheel of chance, resulting in the carnival barker inviting him to another event at midnight. There it is revealed that the barker is actually the devil himself. The Gaffer continues to lose against him until he bets Jaime's soul, and manages to win, which results in him getting three wishes.

Last is "Presto the Besto" by Carmine Infantino & Dick Giordano (art) and Jim Stenstrum (story). Presto is a famous escape artist who manages to escape from many near deaths. His latest however appears to be his last as he's bandaged up, tied up and put in a chained case that is filled with cement and dumped into a body of water. While he dies from this, no one aside from his family believes he's actually dead given his past.
Posted by Quiddity at 4:17 PM