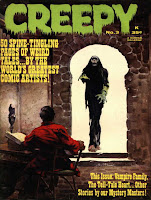 A classic early issue of Creepy, featuring a cover by Frank Frazetta. A scary looking cover, but one that was never chosen for reprinting. Jack Davis does the art for this issue's frontis, "Creepy's Loathsome Lore". During this era of Creepy's existence there was rarely if ever a dud story; this issue is a great example, nothing bad here at all.

Next is "Tell-Tale Heart" by Reed Crandall (art) and Archie Goodwin (story). This is an adaption of Edgar Allen Poe's classic story. This story tells of a servant of an old man who goes crazy due to the old man's eye and kills him. He hides the man's body in the floor boards and succesfully convinces the cops that he's done no wrong until he hears a beating heart which drives him to admit the truth. Goodwin's adaption adds a new ending to the end where the murderer is put in an institution and kills himself after seeing himself in a mirror with his bloodshot eye looking similar to the old man's.

Third is "Howling Success" by Angelo Torres (art) and Archie Goodwin (story). A city is plagued by a werewolf. A man who hates his wife encounters the werewolf but is safely able to hide from it by running through a cemetary fence. He plots to bring his wife to this spot at he next full moon so she can get killed by the werewolf, making him money on insurance. Only when he brings her there he discovers that she's the werewolf and becomes its next victim!

Fourth is "Haunted!" by Gray Morrow (art) and Archie Goodwin (story). A man inherits a hotel from his uncle rumored to be haunted, so he brings a supernatural expert there along with some of his cousins. The cousins leave, and the two of them head through the house, which does appear to be haunted, until the supernatural expert discovers that the cousins were faking it all in order to get the property for themselves. When asked how he knew they were faking it, the supernatural reveals the truth, that he's a ghost himself, as he removes his mask, revealing his skeleton face. A very enjoyable ending to this story.

Next is "Incident in the Beyond!" by Gray Morrow (art) and Archie Goodwin (story). A ship heads through space, testing a new warp drive to ensure it works. There was one prior try at the warp, which failed before. Along the way they find an apparent alien ship, which they destroy. The warp drive works, but they find that it has not saved them any time, and they find another ship trying the drive thinking they're aliens, so they are destroyed as well, like they had destroyed the original ship.

Last is "Return Trip!" by Joe Orlando (art) and Arthur Porges (story, his sole Warren appearance). A man's corpse returns from the dead. As he heads towards his old house, we flashback to when he was alive, and his wife, bored with him, plotted to poison him with a friend of his. The corpse returns to the home and murders his old friend then finds his wife. Surprisingly enough, rather than kill her he kisses her!
Posted by Quiddity at 9:26 AM

Back in 1972 I attended the San Diego Comic Convention and saw a dealer who had the original art of Frazetta's cover for CREEPY #3 for sale -- I couldn't afford to buy it, but he did take a pic of me holding it! If you (or anyone else) would like to see this pic, write to Jim at Pinkoski@att.net