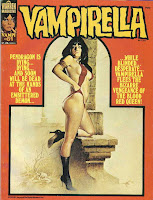 Enrich provides the cover for this issue of Vampirella.

First is "An Eye for an Eye" by Jose Gonzalez (art) and Bill Dubay (story). Vampi is captured by the Blood Red Queen of Hearts, whose eyes were torn out by a demon back in her first appearance in issue 49 (which I've yet to cover on this blog). The Queen of Hearts steals Vampi's eyes, hoping to replace her own with them. At the same time she sends a demon off to steal Pendragon's heart. Unfortunately for her, the interference by a seemingly innocent couple that finds a book of chaos causes a demon to come and attack her. Vampi escapes, but without her eyes is quite helpless.

Second is "Skimpole's Monster" by Ramon Torrents (art) and Bill Dubay (story). This story tells of a friendly old puppet maker whose puppets are able to talk due to him. Behind his back his wife starts having an affair with a doctor because he doesn't pay enough attention to her. When she tells him he has a heart attack and dies, causing all his puppets to die as well.

Third is "Brother Hawk" by Carmine Infantino & Alex Nino (art) and Nicola Cuti (story). This story is about a pair of brothers, one of whom is able to transform into a hawk. He meets a beautiful woman and falls in love with her. She is soon attacked by a bear however, so he attacks the bear and manages to kill it while in his hawk form. The bear ends up being his brother, who was able to transform as well.

Last is "Companions to the Sun" by Leopold Sanchez (art) and Bruce Jones (story). A man piloting a plane crashes in the Arizona desert when he encounters a UFO. All he has from the wreckage is a bottle of cleaner, which he empties to hold water in and a bottle of rat poison. He finds the crashed UFO and rescues the alien inside, who looks like a walking frog man. He wanders through the desert with the alien, surviving mostly due to the alien's ability to find water and cook food. The alien gives him a pill each night which causes the man to have a dream of a beautiful woman. He eventually becomes hooked on the pills. When they finally reach society, the alien is killed by some people who think he's attacking the man. Our protagonist grabs the alien's last pill, but ends up mistakenly drinking the rat poison to help swallow it, which ends up killing him.
Posted by Quiddity at 7:18 PM