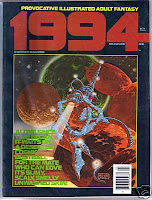 With this issue 1984 becomes 1994. The official reason, as listed on the letter page was to avoid confusion with George Orwell's novel of the same name. More likely reason was due to actual complaints from the Orwell estate. In addition, a magazine about the future named 1984 certainly was starting to make less sense when it was already 1980, the year this issue came out. The cover is by Alex Nino, credited to 'A2-120'.

First story is "East of Euthanasia" by Alex Nino (art) and Bill Dubay (story, credited as Will Richardson). It is the future, where politicians caused the apocalypse and our heroes are traveling across the Earth, working to wipe out the remains of humanity. Using biologial warfare they succeed in some of their plans, but end up getting infected themselves and dying. The politicians who were hiding out come into their vehicle however, which ends up infecting them as well.

Next is "The Jewels of Araknid" by Jose Ortiz (art) and Rich Margopoulos (story). This story features a small bug like humanoid creature on a planet filled with dinosaur-like creatures, including some half human half dinosaur creatures which he helps. They bring him to a temple where they worship a giant spider. Our hero finds some jewels there which he takes, and must fight a giant spider to escape. Only he soon discovers after taking a nap that they're not jewels, but spider eggs and he's quickly eaten by all the baby spiders.

Third is "Outpost 1017" by Mike Saentz (art) and Rich Margopoulos (story). This story features a lone astonaut in a large space shuttle that is responsible for warning earth if there are any dangerous aliens found. He discovers some alien spaceships that don't respond to him, so he blasts them. Only he discovers that what he blasted were actually peaceful aliens with some armor on them.

Fourth is "Live Large" by E.R. Cruz (art) and John Ellis Sech (story). This story features some hunters in the prehistoric era. Some of them get into a fight over some gambling, which gets some dinosaurs involved. A very poor story with some even poorer art by Cruz. Cruz was a horrible, horrible artist who unfortunately did many stories in the last few years of Warren's existence. All his faces look exactly the same

Fifth is the third part of "The Starfire Saga" by Rudy Nebres (art) and Bill Dubay (story). This story is in color. Kris, Snuffy and the others fight the pirates that come aboard their ship. After saving themselves they crash on a strange planet where a bizarre creature comes after them. This series continues to be quite dull.

Sixth is the fourth part of "Ghita of Alizarr" by Frank Thorne (story & art). Ghita, Theneff and Dahib work on recruiting an army of half trolls they find in a cave to join them. Ghita also meets the handsome Temmen whom she has sex with frequently. Theneff realizes that he is actually a traitor working for the evil troll Nergon who will kill her. Ghita initially doesn't believe him, but the next time they have sex he does try to kill her, but she saves herself and kills him, revealing him to be a troll. A pretty good story, my favorite of the Ghita serial so far.

Seventh is the second part of "Haxtur" by Victor de la Fuente (story & art). Haxtur ends up releasing a sorceress from a tree, as warned by an old man. He kills the sorceress only to find that the old man is the real evil one, so he kills him too. He then is encountered by an armored man on an elephant that he defeats. Haxtur leaves, depressed by all the killing he has done. This series would switch to Eerie after this issue.

Last is "Once There Was... A Master!" by Alex Nino (story & art). This is a short three page dialogue/caption less story featuring a bunch of mechanical parts coming together that form a humanoid giant robot.
Posted by Quiddity at 4:49 PM