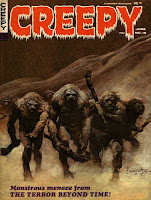 This issue of Creepy features a classic cover of neanderthals by Frank Frazetta. It would eventually be used as the first reprinted cover Warren ever used, on issue 83.

First is "City of Doom!" by Steve Ditko (art) and Archie Goodwin (story). This story features the Barbarian Thane in his first appearance, a character that would appear in random stories by Archie Goodwin throughout the years. Thane goes to a city where monsters run amock, including a sorceress who controls a tentacled monster. Thane defeats the sorceress when her own monster ends up turning on her.

Second is "Adam Link, Champion Athlete!" by Joe Orlando (art) and Otto Binder (story). Adam becomes an athlete on advice in order to improve his public image. He succeeds tremendously in all sports he tries, but that doens't stop a newspaper columnist from criticizing him. This was Adam Link's final appearance, ending his storyline without an ending.

Next is "The Adventure of the German Student" by Jerry Grandenetti (art) and Archie Goodwin (story). This is an adaption of a Washington Irving story. A german student staying in Paris meets a beautiful woman by the guillotine and sleeps with her. The next day he wakes up to find her dead! When he summons the authorities, they reveal that she was executed the previous day and her head falls off! The student goes crazy and ends up in an asylum, where he dies.

Next is "The River" with story & art by Johnny Craig. A pair of thieves try to escape using the river, but one has second thoughts and is killed by his colleague. Although he is shot at, he is able to escape and is helped by an old man on a boat. However, it ends up the old man is bringing him to the lake of the dead.

Next is the one page "Creepy's Loathsome Lore" by Gil Kane.

Last is "The Terror Beyond Time!" by Neal Adams (art) and Archie Goodwin (story). At 16 pages, this is the longest story of the original Goodwin era. Searching for a professor, a man heads deep into a cavern where he had dissappeared. Inside he finds a prehistoric world with dinosaurs and prehistoric men. In addition various other people throughout time have been summoned here including a beatiful woman from England. The professor is found, but it ends up that he's working for an evil being who is responsible for summoning everyone there as well as controlling people's thoughts. Our hero refuses to work under his control and instead kills the professor and the evil being. Afterwards he awakens in the modern age, with the woman there with him. A fairly good story although as discussed by Neal Adams in the Warren companion, the evil being ends up looking like an ice cream sundae rather than something supremely evil.