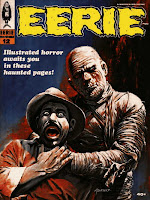 This classic issue of Eerie was the first of the non-Goodwin era, although most of the stories contained within were created before Goodwin's departure. Dan Adkins provides the cover, featuring the Mummy, a cover which appears to have been originally intended for the prior issue. The frontis is a reprint from issue 4, "Eerie's Monster Gallery: Zombies!" by Roy Krenkel.

First story is "The Masque of the Red Death" by Tom Sutton (art) and Archie Goodwin (story, uncredited). This story is an adaption of Poe's classic story. It is about a plague that arises, killing many. Prince Prospero and his friends barricade themselves in a castle safe from the plague, and won't let any of the sick people in. They hold a ball where a mysterious caped man arrives who touches them, causing them to all die of the plague themselves.

Second is "Vampyrus" by Jeff Jones (art) and Archie Goodwin (story, uncredited). A pair of men head to a temple in Central America which houses bats as well as a native in the emple who they flee from. One of them is bitten by the bats, turning him into a vampire that attacks his companion.

Third is "...Nor Custom, Stale..." by Johnny Craig (story & art). A man travels to the desert country of Sumaria with his new wife, who he met in a hospital. Because she has amnesia she remembers nothing about her past, but at a travel agency feels something when they see a picture of 'The Temple of Life' in Sumaria. When they arrive there, he falls asleep one night only to find his wife wandering off to the Temple itself, where druids take her and start casting some sort of spell on her. In a rage he rescues her and kills them, running off into the desert where he collapses. When he awakens he finds the man from the travel agency there, who reveals the truth to him, that his wife was dead and brought back in the temple of life. She needed to head back there annually to stay alive, but by interfering, he has killed her forever.

Fourth is "Escape!" by Joe Orlando (art) and Archie Goodwin (story, uncredited). A pair of convicts escape the island they are imprisoned on, being helped by a native. One of the two kills the other so he doesn't have to share a treasure that he is hiding in the woods. Along the way he gleefully chops the head off an anaconda. Upon finding the treasure, he is stung by a scorpion. He asks the native to help keep him alive, so he does so, by transfering his head to the anacanda!

Fifth is "Portrait of Satan!" by Ric Estrada (art) and Archie Goodwin (story, uncredited). An overworked artist says he'd sell his soul to Satan if he could do some reputable, serious art rather than all the commercial art he's churning out. Satan himself arrives, offering that in exchange for his soul. The artist refuses, not wanting to give up his soul, but agrees to do a portrait of Satan as payment instead. He does so, but Satan takes his soul anyway because he said he'd put his "heart and soul" into the art. A rather poor story based on simple word play.

Last is "The Past Master" by Al McWilliams (art) and Craig Tennis (story, uncredited). The best story of the issue, this is an adaption of the Robert Bloch story, and was originally printed in the book Christopher Lee's Treasury of Terror. Told from the perspective of many witnesses, this story tells of a mysterious man who comes out of the sea and starts buying or stealing large quantities of artwork. It is revealed that the man is from the future, coming back to save works of art that will be destroyed in an upcoming war. Upon his escape however his craft is destroyed by the US navy, thinking its a soviet craft, which triggers the very war that he was speaking of.
Posted by Quiddity at 4:42 PM