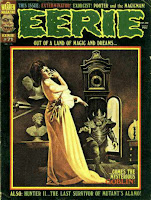 Quite a good issue of Eerie, featuring mostly stand alone stories. The cover, featuring the character 'Goblin' is by Sanjulian. Berni Wrightson provides a Cousin Eerie intro on the front inside cover.

First is "Goblin" by Jose Ortiz (art) and Budd Lewis (story). The Goblin seeks to return to the magic world he came from, but scares mostly everyone he meets. He does befriend a beautiful woman who helps him, but is shot by policemen coming after the Goblin. Luckily he finds another friendly person who has a portal in his home back to Goblin's world. Although self-contained here, Goblin would become a recurring character and receive his own magazine in the early 1980's.

Next is "Time in Expansion" by Paul Neary (art) and Budd Lewis (story), part of the Hunter II series. Hunter and Exterminator meet a group of people in a fortress who have lost their king. Goblins come to attack, but the King returns, and they are able to defeat the Goblins.

Third is "Irving and the Devil Pie" by Leopold Sanchez (art) and Bill Dubay (story). Irving is an outlaw who is very famous and thinks he's immortal, only to be killed. He finds himself not going to hell, but a spirit world where he meets Devil Pie, who allows him to return to the real world, where he marries a rich, but ugly woman. He plots on killing her, but becomes scared of the Devil Pie, so he runs off and hides in the woods until his death. The Devil Pie had no intensions of doing anything bad to Irving however, making it all a waste.

Fourth is "Pooter and the Magic Man" by Luis Bermejo (art) and Bill Dubay (story). Pooter is a failed magician who meets the ghost of a Dr. Sigmond who says he'll let him be a famous magician as long as he assists the poor as well. Pooter becomes rich because of an inheritance and becomes quite famous, but pays no attention to his deal, so Sigmond causes his 'magic' to actually kill his assistants, driving him crazy. Bermejo's art is extremely good here.

Fifth is "Demon's Treasure", by Gonzalo Mayo (art) and Budd Lewis (story). This would be El Cid's final appearance. The story is about El Cid being sent to help a thief who had gone after treasure rumored to belong to a demon. After passing multiple distractions, he meets the wizard who created the demon, and switches cups with him when the man tries to poison him. Some very detailed, but hard to comprehend art by Mayo.

Last is "Mordecai Moondog" by Esteban Maroto (art) and Bill Dubay (story). The issue's best story, this features the character of the title, an exorcist, who is called by an old man to his mansion, which is haunted by seven spirits. The old man goes through the horrific history of the spirits, who were all of the 'Von Daemon' family. The spirits are all actually just part of one spirit, the old man, but Mordecai, who is actually the person who killed the original Von Daemon destroys him. A very interesting story with the horrific, long history of the Von Daemon story providing a lot of interesting and bizarre tales.
Posted by Quiddity at 11:05 AM