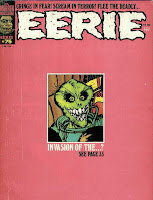 Possibly Eerie's strangest cover ever, colored pink with a central panel of a green alien from Jose Bea's internal story. Quite obviously an attempt to save money and get out a cover with little to no effort.

First is "The Demons of Jebediah Cold" by Jose Ortiz (art) and Bill Dubay (story). Jedediah Pan comes across a town next to another town where freaks are living. The people in that city, called Amity start abusing the freaks in the neighboring town, going as far to have a mob head there to kill them all. Jedediah, along with Jeremiah Cold who shows up summon their demons which kill all the people from Amity.

Next is "The One Eyed Shall Be King" by Leopold Sanchez (art) and Budd Lewis (story), the conclusion to the Freaks series. The Freaks are captured in a desert and brought before a small creature held in a glass chamber who breeds freaks in a nearby town to be fed to it. One of the freaks goes on a rampage and kills him. Overall this was quite a poor series; it would be followed up with a sequel series, the Moonweavers starting in the next issue.

Third is "Oogie and the Worm!" by Esteban Maroto (art) and Bill Dubay (story). This issue furthers the adventures of Leroy, Prunnie and Oogie, who pretend to be Buck Blaster and Thelma Starbust. In the real world Thelma has gotten a popular spinoff show seperate from Buck Blaster's, causing Prunnie to get rather arrogant. A rather poor story compared to the last one, both from an art and story standpoint. I wonder what a 'worm' has to do with this story as well.

Fourth is "Invasion" by Jose Bea (art) and Esteban Maroto (story, miscredited to Bea). This story was originally published in the comic 'Dracula' in England. A short, bizarre story about alien creatures arriving on Earth and discussing the human body. It ends up that the aliens are what we call cancer. This issue's best story, with a lot of bizarre artwork, a Bea trademark.

Last is "Gillian Taxi and the Sky Pirates" by Luis Bermejo (art) and Budd Lewis (story). Despite Bermejo's terrific artwork, this is a dull, poor story that drags excessively at 16 pages long. It features the adventures of a large flying taxi that is shaped like a teapot.
Posted by Quiddity at 3:54 PM