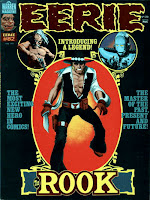 Issue 81 of Eerie contains no continuing stories that impact other issues, so I'll be skipping that issue for now and going straight to issue 82. This issue's cover highlights Eerie's new main recurring character, the Rook, in a cover by Bill Dubay (the character's creator) and Luis Bermejo. The Rook begins a new era in Eerie, as a continuing open ended series with more of a traditional hero, with this character appearing in every non-reprint issue of Eerie for the next 30 issues or so until the character got its own magazine. This makes Eerie similar in format to Vampirella for a while, with a long opening story featuring the magazine's main hero, and the remainder of the issue filled with backup stories. Unfortunately the Rook's stories were generally at the same quality as Vampirella, meaning that while there was the occasional good story, most were average at best. And while Vampirella could for the most part always boast tremendous artwork from Jose Gonzalez or Gonzalo Mayo, the Rook was drawn by Luis Bermejo, who at this point in his career started to slowly decline in quality, most likely because of his task of drawing a large Rook story in each issue. Anyway, let's get on to the stories.

First is The Rook in "The Man Who Time Forgot!" by Luis Bermejo (art) and Bill Dubay (story). The Rook, whose name is Restin Dane, is a physicist who has created a time machine in the shape of a giant rook chess piece. The Rook goes back in time to the old west where he rescues his Great Grandfather, Dane and brings him back to the present. In the present the confused Dane meets Manners, the tin man assistant to the Rook and his other various robots. The Rook meanwhile goes back into the past where he attempts to save his great great grandfather from death at the alamo but fails, being only able to save a single boy.

Second is "And Now the Game is Afoot" the final story in the Tombspawn series. Art is by Carmine Infantino & Gonzalo Mayo and story is by Gerry Boudreau. Steve and Biff battle the Russians but are tricked by many holograms and delusions from them. Eventually Biff is killed by a monster that Steve destroys. The series ends here, unresolved.

Third is "Castle of the Assassin", the second Scallywag story, with art by Jose Ortiz and story is by Budd Lewis. Sullivan heads off to battle the samurai who stole a statue from him and killed some of his women. He battles the samurai and manages to defeat him, but the samurai ends up being his friend Konishi.

Last is "In a Deep Sea Tomb", the latest story in the Pea Green Boat series. Art is by Leopold Sanchez and story is by Budd Lewis. Al and Eric head underwater where they find a sunk nazi ship. They come across some pirates who capture them, desiring food. They manage to escape from the pirates and destroy their ship. A rather boring entry this time, with much of the captions written in cursive, which is very hard to read.