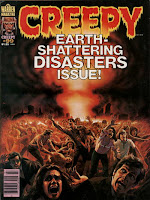 This issue is an "Earth Shattering Disasters" special issue featuring stories about the apocalypse or disasters. Bob Larkin paints the cover, featuring people fleeing from a mushroom cloud explosion. The bottom right portion of the cover features a man who looks strikingly similar to Roger Moore, who was playing James Bond at the time.

First is "An Old Game" by Pepe Moreno Casares (art, his Warren debut) and Nicola Cuti (story). This story is about an old submarine captain who plots to kills his wife and her lover due to her having an affair. He acts towards his fellow soldiers as if there's a nuclear war on the surface and he fires off a torpedo that blows up the city his wife is in. At the same time however her lover is in the air in a plane that blows up the sub.

Second is "Ssshh!" by Joe Vaultz (art) and Cary Bates (story). Aliens come across Earth, now in ruins. Multiple aliens end up causing large explosions by doing harmless things such as stepping on a horn and firing a toy gun. About to take off one of them discovers that humanity polluted the Earth so much that any slight noise will cause an explosion. Them taking off ends up blowing up the entire earth.

Next is "Brothers" by Jose Ortiz (art) and Bill Dubay (story). This story is about two robot children who live with the only normal human left on Earth. The ruins near them are overrun with mutants who try to kill them. While the old man tells the children that the mutants are the deformed remains of humanity, the mutants themselves reveal the truth, that they are aliens and that the old man was actually one of them who was transformed into a human in order to trick humans into destroying themselves. The mutants 'cure' him by destroying him and his robots.

Next is "A Slight Case of Overkill" by Leopold Sanchez (art) and Bill Dubay (story). This story surrounds the last two men on Earth as they try to escape. Due to the arms race a crazy scientist created a gas that de-evolved humans. It worked too good, turning everyone to turn into chimps. This story appears to have been originally intended for issue 95's all apes special.

Fifth is "There Shall Come a Great Darkness" by Alfredo Alcala (art) and Bob Toomey (story). In this story a great darkness is heading across the universe. On Earth people know they don't have much time left and decide to punish the astronomers who discovered this by hanging them. A friend of the astronaut allows his wife to kill herself then watches the darkness come with her corpse.

Last is "One Hell of a War" by Leo Duranona (art) and Roger McKenzie (story). This story features a war between Earth and alien beings. A man on a ship with a robot witnesses the Earth destroyed, but in actuality it is all due to drugs that he is under that will keep him focused on the alien enemy.
Posted by Quiddity at 4:12 PM