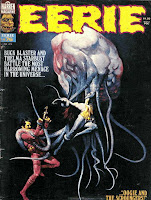 This issue of Eerie features an Oogie cover by Sanjulian.

First is "Deliver the Child", the first of a two part spinoff series from the Freaks, titled The Moonweavers. Art is by Leopold Sanchez and story is by Budd Lewis. This series stars Gerome and Jason, the sons of the boys who appeared in the second Freaks story. Gerome has a special power where he can sense supernatural things occuring. One such thing happens in their town, so they go to investigate and find the local hardware store owner summoning a demon, Jahnte. Jahnte is shocked to find out that the man wants him to protect his baby daughter rather than make him powerful or commit some other deed. Jahnte loses his hands when he tries to attack the man, and retaliates by chewing off the hands of the man's baby. Sanchez's art is quite good, and this story is a vast improvement over the three part Freaks series.

Second is "Highsong", starring Wolfer O'Connell. Art is by Luis Bermejo and story is by Budd Lewis. Wolfer is confronted by some native americans who want to kill him because of a monster that they think arrived due to the white man. Wolfer outsmarts them then confronts the beast, which is killed when they come across a pack of wolves.

Third is the latest Oogie story, "Oogie and the Scroungers" by Esteban Maroto (art) and Bill Dubay (story). Leroy and Prunnie are confronted by the IRS, who fly a ship to their planet and are seeking not only taxes not paid while they were a part of human society, but also taxes for their time on Oogie's planet. Prunie, with her godlike powers transports Leroy away and blows up the IRS agents. While Leroy thinks she has died, she comes back, completely unharmed. Maroto's art is unfortunately quite inconsistent and poor in this story. The head IRS guy's head fluctuates in size in pretty much every panel.

Fourth is "The Silver Key" the final Peter Hypnos story. Art and story is by Jose Bea. Peter once again finds himself in a bizarre world, this time after being sucked into a painting. He uses a key to enter a door, where he is put on trial, has his key taken away, then meets others who lost their key. He eventually finds a large pile of keys, and using the first one he finds opens yet another door and returns to the real world.

The issue concludes with the premiere story of "Darklon the Mystic" by Jim Starlin in his Warren debut. An eyepatched man meets an assassin in a bar who tells him how he and three fellow assassins went after a man named Darklon, who lives in a giant castle. They sneak through the castle and blast away in his bedroom only to find that he's not there. Soon all are dead except the assassin at the bar. The eyepatched man ends up being Darklon himself, and kills the assassin after finding out that the person who hired the assassin was none other than Kavar Darkhold, his father.
Posted by Quiddity at 3:32 PM