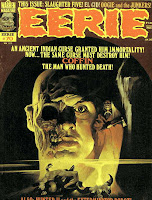 Coffin gets yet another cover dedicated to him for this issue, done by Sanjulian. Berni Wrightson provides a one page intro by Cousin Eerie.

First story is Coffin's finale, "The Final Sunrise" by Jose Ortiz (art) and Budd Lewis (story). Coffin seeks to redeem himself by helping a native american tribe who has been ordered by the government to give up their land. Coffin initially tries to deal peacefully, but after multiple failures, he instead goes to battle with the native americans, who successfully defend their land. Coffin writes to his congressman brother hoping that he can help the native americans keep their land. Having done a good deed, Coffin goes to see the native american that cursed him, hoping that he can die for good. Only he finds the man already dead, leaving him alive for good. Coffin realizes how he can truly die for real, and allows himself to be completely consumed by ants, ending his saga once and for all. A terrific end to yet another terrific series drawn by Ortiz, who drew three of Eerie's best series ever, Night of the Jackass, Apocalypse and Coffin, all within the space of a year or so.

Next is the third part of the Hunter II series, "Goblin Thrust" by Paul Neary (art) and Budd Lewis (story). Hunter is confronted by a group of men who think he's a Goblin, but thanks to the Exterminator they reveal themselves to be allies. They head to an outpost where the Exterminator replenishes his energy, then helps defeat some Goblins. One of the men ends up being a traitor, summoning a bunch of Goblins, so Hunter and Exterminator head off on their own while the others fight, and unfortunately give up their lives.

Third is "From the Cradle to the Grave" by Leopold Sanchez (art) and Gerry Boudreau (story). This story carries the series title "Code Name Slaughter Five" but as you'll see by the conclusion, this ended up being a self contained story. In the future overpopulation has plagued the Earth so much that the government has put into steps attempts to control the population, such as forcing abortions on pregnant women, castrating men, and lessening the penalties for murder. They also secretly support revolutions that will cause even more deaths. Our hero, Ames is a government agent sent to work with an activist, Winthrop and infiltrate her organization. He succeeds, but the two of them end up being eaten by cannibals!

Fourth is another appearance by El Cid, "Crooked Mouth" by Gonzalo Mayo (art) and Budd Lewis (story). El Cid defeats the Moors in battle, but is accused of being a traitor when he decides to let them live. An old enemy of Cid's, Count Ordonez tells this to the king, trying to get Cid in trouble, and summons a demon to kill Cid. Cid defeats the demon however, reveals Ordonez's treachery and kills him. He explains his reasoning to the King, which is accepted. Some very nice art by Mayo, but it does get rather confusing at times, particularly in the battle scenes because it is so complicated.

The issue concludes with "Oogie and the Junkers", the first part of the Oogie series. Art is by Esteban Maroto and story is by Bill Dubay. Not the greatest story, but some very enjoyable Maroto art, reminicent of my favorite art job of his, "Scourge of the Spaceways" from 1984 issue 2. The story is about Leroy, a crewmember on a Junker ship who is a big fan of Buck Blaster and his companion Thelma Starbust. While married, Leroy has a relationship with a female crewmember on his ship, Prunie. The two of them head down to a planet hoping to salvage some supplies, but instead find Oogie, a creature who has the ability to create anything he desires. Oogie, a big fan of Buck Blaster as well, desires for Leroy and Prunie to stay there with him and experience Buck Blaster for real. They end up having no choice as Oogie ends up destroying their ship, causing their allies to think they have died.

From front to back this is quite a good issue, not a single poor story.
Posted by Quiddity at 6:54 PM