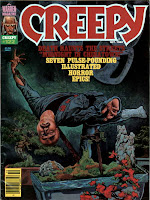 A Richard Corben cover starts off this issue of Creepy, featuring an upside down dead asian man. Uncle Creepy is given a one page introduction by Rudy Nebres.

First story is "The Killing" by the team of Alex Toth & Leo Duranona (art) and Roger McKenzie (story). This story, taking place during the civil war features a confederate civilian woman who ends up being forced to take in some Union soldiers. Although she planned on blowing them up, killing herself along with them, she has a change of heart and waits until they leave before killing herself.

Next is "The Watcher" by Leo Duranona (art) and Bob Toomey (story). This story is about a censor at the Comics Code who is very over the top with his censorship. He takes home a new comic one night, Mooneyes, featuring a scantily clad heroine. He discovers the real Mooneyes, or rather the model that portrays her and ends up killing her. Having gone crazy by the event, he moves out to the suburbs and becomes a comic writer himself, but his prospective publisher comes to see him and finds her rotting corpse in the house with him.

Third is "The Perfect Specimen" by Steve Gan (art) and Budd Lewis (story). This story features two rather confused aliens who come to Earth and land in an ocean, thinking that fish are the dominant species of the Earth. They capture a great white shark and thinking it friendly, go in a tank to meet it, unaware of how dangerous it actually is.

Fourth is "Midnight in Chinatown" by the team of Carmine Infantino & Alfredo Alcala (art) and Gerry Boudreau (story). The issue's weakest story, this is a mystery/action story about a man attacked by a mysterious assassin in Chinatown. He investigates and eventually encounters him again, discovering that he is Japanese and manages to kill him.

Fifth is "Routine" by Martin Salvador (art) and Carl Wessler (story). This story appears to have been originally written years before as Carl Wessler was no longer with Warren by this point and Uncle Creepy hosted the story, which hadn't happened in years. The story surrounds a middle aged man in a rather quiet city in his normal routine, such as going to the Bank where he is president, and having a party for his wife. As we reach the last page and find him dining with all skeletons it becomes apparant that he's the only human left alive, but to keep himself sane he pretends that everyone else is still alive. A short, but interesting story.

Sixth is "Magic Man" by Fred Carillo (art) and Gerry Boudreau (story). This story features a magic man who stays in a book store who befriends a young woman, but won't let her touch him. He has the ability to create illusions of any real matter, making it appear to be something else. The woman thinks that he's an illusion himself, but when she touches him it is she who dissappears, as she was an illusion, not him.

The issue concludes with "Roomers" by Mike Zeck (art) and Bruce Jones (story, miscredited to Budd Lewis). This story features a nerdy college student who goes through an elaborate plan to tutor a beautiful fellow student. When she refuses his advances however he snaps, killing her and raping her corpse. He succesfully escapes his apartment complex and disposes of the body, but when he returns he discovers that his elderly landlady spied on him and blackmails him into having sex with her! One of the most horrific Warren endings ever, if you're a young guy like me.
Posted by Quiddity at 2:00 PM

That cover is not by Corben...