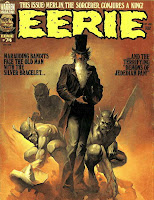 Only four stories in this issue of Eerie. The cover is by Ken Kelly, featuring Jedediah Pan and his demons. Auraleon provides the interior front cover feature of Cousin Eerie.

First is "The Demons of Jedediah Pan" by Jose Ortiz (art) and Bill Dubay (story). Pan is confronted by some bandits in the desert so his uses his bracelet to summon some demons which beat them, tearing out all their teeth. A rather dissappointing second part to this series, which still has a ways to go before its conclusion.

Second is "Father Creator" by Paul Neary (art) and Bill Dubay (story). The story features a massive spaceship that is responsible for bringing saviors to various planets. The current person in charge of the spaceship, known as 'Father' is all on his own. The story surrounds what happens when he revises the latest savior and seeks to end his loneliness. An okay story with some good art by Neary.

Third is "A Secret King", the second Merlin story. Art is by Gonzalo Mayo and story is by Bill Dubay. A rather long, drawn out story at 20 pages long, this story features the well known tale of King Arthur, including his escapades with Merlin and Snivel, the death of his father the King, his time with Ector and Kay and the eventual discovery of the sword in the stone.

Last is "The Expedition" by Leopold Sanchez (art) and Budd Lewis (story). Two friends go canoeing in the wilderness in Louisiana. Eventually they come across an abandoned cabin where a man has been killed by some creature. It eventually ends up that there is a monster in the river that one of the men is feeding, and gives him his friend to eat. The monster goes out of control however and kills him too.
Posted by Quiddity at 6:27 PM