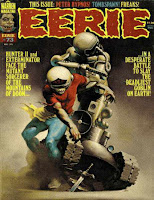 This issue of Eerie by Ken Kelly features Hunter II and the Exterminator.

First is the finale of the Hunter II series, "Death of the Phoenix" by Paul Neary (art) and Budd Lewis (story). Being recovered by Yaust, Karas and Exterminator discover the truth, that Yaust is actually the good guy and that the goblins he created to fight off the evil ones went out of control. Mandragora is the true evil one, and there is no such thing as a time shell which will be used to save the world. Karas returns to Mandragora's home, where he finds the White Council and they are all killed. The world doesn't come to an end after all, and the series ends on a happy note.

Second is "Carnival at Midnight", the second story in the 'Freaks' serial. Art is by Leopold Sanchez and story is by Budd Lewis. This story surrounds two young brothers, one of whom is crippled who come across the freaks late at night. The boy's father and then a mob come after them, only to find that the Freaks were actually helping the boy by fixing his legs for him.

Third is "Day of the Vampire 1992: The Tombspawn" by Gonzalo Mayo (art) and Bill Dubay (story). This story takes place in a post apocalyptic world where much of the world is in ruins. Two men, Stevie and Biff hunt various creatures and come across a cavern where a beautiful woman lies inside in suspended animation. A hologram appears and tells them that she is a vampire and warns them of reanimating her. Stevie falls in love with her however and brings her back to life. After sleeping with him she escapes however, and the Earth forces blow her up. Stevie finds himself now a vampire after an encounter with her and attacks his friend Biff as the story ends.

Fourth is "A Brave Terror Leads to Death!" the final segment in the 'It' series. Art is provided by Jose Gual, in his final Warren appearance, and story is by Carl Wessler. Thieves attack Jan Foley's house, but It arrives once again to rescue her. The thieves plan to blow up It so it can't bother them anymore. Jan and her fiance however follow them and prevent them from doing it. The thieves sneak into their house but It arrives and saves the day yet again. Although the series ends in an open ended manner, this would be the final appearance of It. I do have a few more It stories to cover which appeared in Creepy, including the original story, which will come some day soon down the line.

Last is "Voyage to the Final Hole", part 2 in the Peter Hypnos series, with art and story by Jose Bea. Peter finds a rose in the field that grows huge and swallows him up. He continues to shrink inside the rose and meets a multitude of bizarre creatures who tell him that he'll make it through a hole back to safety as long as he believes that he'll keep shrinking. He does so and shrinks small enough that he finds the hole in question and jumps into it, bringing him back to the real world.
Posted by Quiddity at 5:19 PM