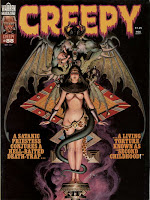 Steve Hickman provides the cover for this issue of Creepy, his sole cover for Warren.

First is "Castles Made of Sand" by Jose Ortiz (art) and Gerry Boudreau (story). One of, if not the most nonscensical and confusing story in this magazine's history, it features a bunch of interconnected storylines about a God on a beach, a woman in a cave and a President's quest to eliminate all religious people.

Second is "Eye For Eye, Fang for Fang" by Carmine Infantion & Ernie Chan (art) and Doug Moench (story). This story is about the son of a count, Prince Varma who befriends a shephard, Strack. One night they are attacked by a wolf. While Varma is okay, a werewolf soon appears in the land. The count has Strack lock up Varma each night, as Varma admits that he must be the werewolf. Years pass. Now grown up, Strack has an affair with the Count's wife. The Count has him locked up with Varma on the night of the full moon. Only it ends up that Strack was the werewolf, not Varma, and the next day he gets his revenge on the Count.

Third is "Do You Believe in Sinsigs" by Luis Bermejo (art) and Gerry Boudreau (story). A light hearted story about Sinsigs, children who take on the appearance of various animals. The star of the story is a boy who looks like a normal human except for a tail. He meets a shapeshifting fairy who tells him that Sinsigs are on Earth to keep people believing with the fantastic. The boy and his friends are confronted by boogeymen, but laught at them so they dissappear. Too lighthearted a story for me, although Bermejo's art is good.

Fourth is "Temple of Seilos" by Leopold Sanchez (art) and Bruce Jones (story). A rather convoluted, but interesting story about two agents that are investigating a man named Seilos on a planet named Phobos where a Toad God is worshipped. Its rather confusing to summarize here, but has some interesting twists in it and good ending.

Fifth is "Iron Man" by Esteban Maroto (art) and Bill Dubay (story). This story is about a kingdom where a knight is upset with a wizard, not believing him, and challenges him to a duel. During the duel the knight overpowers the wizard and chops off his head, only for the headless corpse to come after him. It ends up that it was all an illusion and the wizard proves once and for all that he has real powers.

Last is "Second Childhood" by Ramon Torrents (art) and Bruce Jones (story). This story is about a man, nicknamed Knobby and his rich friend, Chadwick. Chadwick, who with his wealth can have any woman he wants becomes enamored with a priestess in a small African village. Forbidden to be with her, he burns down the village and brings her back to the US. She refuses to sleep with him until drunk one night he rapes her. After their baby is born, Chadwick ends up going into an institution, being unable to write or talk anymore. Knobby goes to his home where he finds Chadwick's baby, which is revealed to actually have Chadwick's mind.
Posted by Quiddity at 7:33 PM

Not sure how it would fare on your list, but "Second Childhood" would probably earn a seat in my 20 favorite Warren stories. Now, having said that, I haven't read the damn thing in forty-plus years but I do remember that last panel being pretty darn... creepy. Looking forward to revisiting that one in about a year or so.