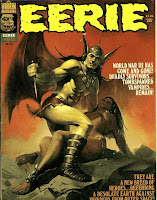 A Sanjulian cover featuring Tombspawn leads off this issue of Eerie.

First is "The Invisible One", the first of a new series, Scallywag. Art is by Jose Ortiz and story is by Budd Lewis. An old American man in Japan, Sullivan is attacked by Samurais but easily defeats him. He befriends a friendly samurai, Konishi, who goes with him to his ship, where he lives with a number of women. That night the women are killed by ninjas. A so-so start to this new series.

Second is "Retribution", the latest Darklon story. Story and art are by Jim Starlin. This story continues the origin of Darklon from the previous story. After having been decapitated by the nameless one's minions, Darklon is brought back to life with great power that comes from his eye. Darklon easily kills Blacklore and frees his father.

Third is "On Moonlight Bay", the second Pea Green Boat story. Art is by Leopold Sanchez and story is by Budd Lewis. Eric and Al sail across the sea in their boat and come across a harbor where they are fired upon, by people who think they are instead a monster that kidnapped babies. Al and Green head to the boat where the captured kids were, finding out that a radiation burned cannibal had been capturing the children and eating them, having gone mad from his burns.

Fourth is "Pieces of Hate", the next story in the Tombspawn series (originally titled Day of the Vampire in issue 73). Gonzalo Mayo once again provides the art while Gerry Boudreau provides the story. Our heroes can kill whoever they want to satisfy their thirst for blood but are concerned about creating too many vampires that will be competition for them. Meanwhile Russians in a space shuttle head down to the surface and reveal that they were responsible for the war that ruined the world. Our heroes and the Russians decide to hunt for each other to determine who will control the Earth in its current state.

Fifth is the second and final story of the "Third Person Singular" storyline. Art is by Luis Bermejo and story is by Bruce Jones. Our hero encounters the women from the previous part and she brings him to a society of women only. The government raids their society, so the two of them escape.

The issue concludes with "Queen of the Purple Range", the second Cronk story. Art is by Carmine Infantino & Al Milgrom and story is by Nicola Cuti. Cronk is responsible for transporting a group of eggs, one of which cracks open, revealing a spotted women who immediately destroys all the other ones. She is actually the new queen of the planet Gagoian. She battles the sole survivor from the eggs and Cronk brings her to her planet where they won't accept her.
Posted by Quiddity at 9:27 AM