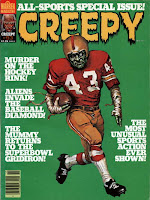 This is Creepy's second special issue dedicated entirely to sports. The first, previously reviewed by me was issue 84. The cover is by Don Maitz, his first for Warren. Like the first sports special, this issue contains a lot of Carmine Infantino and Roger McKenzie.

First is "The Replacement" by Carmine Infantino & Dick Giordano (art) and Roger McKenzie (story). This story tells of a baseball player who suddenly vanishes in the middle of a game, replaced by a weird looking creature. The creature takes his place and is very successful, but faces discrimination from the human players. He eventually vanishes, replaced by the original player when they are close to winning it all, resulting in them losing.

Next is "The Return of Rah" by Carmine Infantino & John Severin (art) and Roger McKenzie (story). This story is a sequel to "The Mummy's Victory" from the previous sports special. Rah the mummy is once again brought into the game of football, this time by a scout who was impressed by his prior performance. Once again Rah is a big football star, winning many games.

Third is "The Great Black Cheese" by Carmine Infantino & Alfredo Alcala (art) and Bill Dubay (story). This story is about an old black boxer who never got his big chance due to his mother getting sick. He takes part in a boxing match which causes a heart attack. With his death he has a vision of finally getting his big shot.

Fourth is "Elixer" by Leopold Sanchez (art) and Roger McKenzie (story). This story is about a veteran hockey goalie who takes a magical elixer that makes him young again. It succeeds, making the team very successful, but each time he takes the elixer its effects aren't as powerful and he eventually ages to death in the middle of a game.

Fifth is "Running Wild" by Carmine Infantino & Alex Nino (art) and Roger McKenzie (story). This story tells of siamese twins, who when seperated causes one to be paralyzed, but he has psychic powers to control his other brother. He forces him to do things he doesn't want to do, so the brother eventually causes him to die of exhaustion by running too hard.

Last is "Cold Blooded Murder" by Leo Duranona (art) and Bill Mohalley & Nicola Cuti (story). A young boy paralyzes another boy in a hockey game after being inspired by his favorite hockey player. The boy's life is pretty much ruined by this event, and he tries to kill himself by drowning, but his body won't let him kill himself and he is saved by a priest.
Posted by Quiddity at 3:03 PM