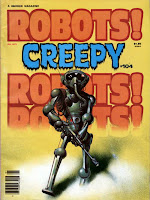 This issue is an all robots special of Creepy. The cover by Ken Kelly was originally used for the back cover of Eerie 63, although the entire background has been edited out for this reprinting. A so-so issue at best with nothing terrible but nothing that good either.

First is "The Games" by Pablo Marcos (art) and Roger McKenzie (story). The story features a pair of gladiator 'brothers' who perform very well, but are forced by their masters to be part of a large melee in which they fight various people including themselves. The two of them are the last standing and forced to fight to the death, but the winner is allowed to go free from his masters, who end up being robots who have taken over humanity.

Next is "The Caretaker" by Alfredo Alcala (art) and Bob Toomey (story). The story features a man on his own accompanied by robots who is allowed to live forever as long as he doesn't head outside. He eventually decides to knowing that he'll die, and ages to death, leaving only the robots left.

Third is "Mother Park" by Jose Ortiz (art) and Roger McKenzie (story). This story features an oafish man who is chased by cops through an amusement park that talks to him. He is being chased due to causing the death of a young girl. He is haunted by spirits within the park and soon meets his death.

Fourth is "In the City of Gold" by Pepe Moreno Casares (art) and Budd Lewis (story). This story features the character Wolfer O'Connell, who originally appeared in Eerie 76. While traveling through a winter wilderness, Wolfer comes across a city occupied by a giant robot man. The robot man tells him that he is from another planet and calls this a City of God. An interesting story, the best of the issue.

Fifth is "Holocost" by Terry Austin (art) and Steve Englehart (story). This story takes place in the future where there's a great war of men vs. women. Eventually the fighting is reduced to a single man and woman who have a prior relationship with one another, but it ends up that the woman is nothing more than a hologram, as the robots had taken their place a while before.

The issue concludes with "Keep Kool" by Alex Nino (art) and Bob Toomey (story). An old man who is quite wealthy despises humanity so he heads off to another planet where his only companions are robots. He has the robots fight one another, then receives a giant box that he can create monster from to fight one another.
Posted by Quiddity at 7:07 PM