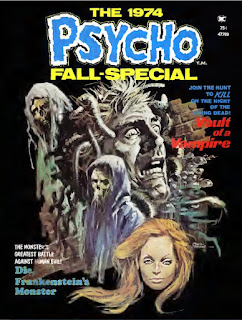 Prieto Muriana provides the cover for this issue of Psycho, cover dated November 1974. This issue is all reprints with the exception of the first story.

Our sole new story for this issue is "Die, Frankenstein's Monster!", a continuation of the new Frankenstein series recently started up in Scream. It is written by Al Hewetson and has art by Cesar Lopez. The monster begins the story with the origins of the term Prometheus, which was used for the subtitle of Mary Shelly's original novel of Frankenstein "The Modern Prometheus". Frankenstein's monster travels through the mountains of Romania, finding an injured goat and bringing it to a cave, where he finds two coffins. He opens one and finds a man inside, Dracula, who immediately attacks him. The monster eventually knocks Dracula out only to be bitten in the neck by his female companion, who finds his blood muccused and disgusting. Dracula and Frankenstein tell each other their stories. Dracula's companion, Leah, comes up with a name for the monster, Damon, and the two kiss. When Dracula heads out in bat form to find some food, Leah reveals to Damon that the story Dracula told him of his origins, about him being a force for good is all lies, and that the power of vampirism is given by Satan. Dracula returns. He and Damon argue, and Dracula puts Leah under a trance, but finds that with the sun coming out, he must rest. He tells Damon to take Leah and go. Upon carrying Leah outside, Damon finds that her body immediately decomposes due to exposure to the sun. The shadow of Damon holding Leah's body forms a cross, which also kills Dracula. This was a fairly good story, with some decent art as well. A good thing we got some quality with our only new story of the issue.

Next is "Revolution" by Rick Margopoulos (story) and Tom Sutton/Dan Adkins (art), originally published in Psycho #2. On the Planet Sade slaves are constantly forced to fight in "games", battles in a coliseum against giant monsters. The King upon hearing of a possible rebellion instead desires more slaves to fight in more games to quell the populace. So the games become more and more severe, leading to a revolt by the citizenry, who also release all the monsters. The King and his men are forced to flee the planet on a spaceship, landing on another one where carnivorous plants soon attack them. The men flee towards what appears to be a city sitting atop a lake. The king tosses away all his underlings and his own daughter to save his own hide, only to realize that the lake itself is a blob-like entity that consumes him. Adkins' work is barely noticeable on this story, making it look like a Sutton solo story.

Third is "The Vow!" by Pat Boyette (story & art), originally published in Psycho #6. An aristocrat named Aaron becomes a single father when his wife dies from the plague. The plague ravishing the countryside and the aristocrats being slayed by the common folk, he flees, eventually finding work as an overseer of the disposal of the bodies of those who died from the plague. Aaron soon realizes with horror that his daughter Cassandra thinks dead bodies are real and her friends! Time passes, and Cassandra starts a relationship with a local ruffian named Andrew who is rumored to be the paramour of the Empress. Aaron is scared of what will happen if she finds out about the affair, but Cassandra says she'd rather die than be without him. Aaron comes to a good solution; he rats out Andre to the Emperor, who has Andrew killed, then due to his job collects his body and provides Cassandra his body! Its always a joy to read a Pat Boyette horror story.

Next is "Birth Announcement" by Al Hewetson (story) and Ramon Torrents (art), originally printed in the Psycho 1972 Annual. In this brief four page story, a man is anxious as his wife is about to give birth. He thinks of how he met his wife when he saw her swimming in the coast of Cape Cod. His wife is soon revealed to be a mermaid, and she has given birth to a large number of eggs which they bring home with them, waiting for them to hatch. A rather predictable ending to this story, but Torrents' art is excellent as usual. The story is said to take place in the town of Winchester by Cape Cod, but as someone who lives in Massachusetts, I can say the town of Winchester is actually nowhere close to Cape Cod.

Next is "Phantom of the Rock Era" by Chuck McNaughton (story) and Ralph Reese (art), originally published in Nightmare #4. A young woman, Lala, sees Roddy Skeane, a guitarist and singer perform at a club and decides to hook her ride to his, thinking he will eventually become famous. Lala is rather disgusted by his ugly face, but is convinced he will become famous and loves the lavish lifestyle she is hoping to get for them. Eventually Roddy reveals the rest of his band to Lala, and she finds out they all had died in a witchcraft ceremony and have been resurrected from the dead! Roddy wants her to join them permanently and sacrifices her so she can come back from the dead like them. I wasn't the biggest fan of this story, but Reese does a great job with the art.

Sixth is "The Midnight Slasher" by Doug Moench (story) and Pablo Marcos (art), originally published in Psycho #6. A killer known as the Midnight Slasher haunts the streets, stabbing to death any innocent bystander that comes upon him. A maid, Miss Watts, tends to a young woman she serves, only for her to be the next victim! Watts talks to the local constable, who has raised suspicion for himself due to how quickly he makes it to the murder scenes. He comes across Miss Watts later that night by a bell tower, where Watts is revealed to by the slasher, only for her to be crushed by the bell! This story packs a double twist in the end, with it not being enough for Watts to be revealed as the Slasher (which was pretty predictable anyway).

Seventh is "Within the Torture Chamber" by Kevin Pagan (story) and Doug Wildey (art), originally published in Nightmare #5. Wildey does a good job here, providing artwork that reminds me of Angelo Torres. The story takes place in Spain in the 16th century, where a woman is executed by torture, after having had her tongue torn out. The judge and executioners leave only for a noble, Don Alexander to come down, and speak to her body, revealing he falsely had her accused because she spurned him, resulting in her execution. The judge, who had heard it all fights Alexander but is slain by his sword. Alexander flees, but goes back for his sword, not wanting evidence left behind. He starts getting quite nervous however, and the judge rises, tearing out his tongue and chaining him to the wall. The ending to this story was somewhat confusing (I have included my interpretation here).

Last is "Vault of a Vampire", featuring Al Hewetson for the story and Serg Moren for the art. This story was originally published in Nightmare #3 and was actually Hewetson's first story for Skywald. A vampire stalks ancient Rome, attacking someone in the Arena, and having previously appeared at other crowded events. A trio of men seek to destroy the vampire. During its latest attack, they follow the vampire to the graveyard and the crypt where it makes its home. They wait outside the blocked entrance, thinking they can wait out the vampire. A couple of weeks pass and they break in, finding that the vampire has started devouring its own flesh. They then kill it with swords. I question Hewetson's knowledge of vampires in this story, it should be seeking to drink blood, not consume flesh...

Gene day provides a one page pin up feature on the back cover.
Posted by Quiddity at 11:05 AM