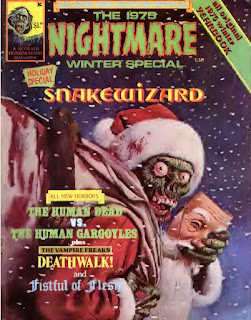 With this we have hit the final issue of Nightmare, issue 23, and also identified as the 1975 Nightmare Winter Special. It is cover dated February 1975 and has a cover by Vicente Segrelles.

Gene Day draws the one page frontispiece, advertising the next issue of Psycho.

Our first story is the latest in the Human Gargoyles series, "The Human Gargoyles vs. the Human Dead" by Al Hewetson (story) and Maelo Cintron (art). This issue also includes a one page summary of the series and a Vicente Segrelles promo cover of a future Gargoyles special which was never published. Edward and Mina are now in their castle, talking about their son Andrew's schooling. Meanwhile, outside, Satan plans his next move. Edward has publicized his battles with Satan, but Satan wants humanity to stop believing in him so they can't reject him. But for now, rather than focus on that, he decides to revive a number of corpses from the dead and send them to attack the castle. Edward makes quick work of them but then he and Mina find their son has been kidnapped. With the end of Skywald coming soon, this would be the last story in the Human Gargoyles series and is mediocre as the rest. In fact it is largely pointless and a retread beyond perhaps some of Satan's scheming which will never come to pass due to the end of the series. The kidnapping of Andrew is something that this series has already done before and seems to be used largely just to give the story a cliffhanger. Once my coverage of individual Skywald issues is over, I'll do a post or two speaking to the company's main series and will offer some final thoughts on this one at that point.

The second story is "Tradition of the Wolf" by Ed Fedory (story) and Jesus Martin Sauri (art). A blacksmith and his son work in their shop and the father tells him he is going to go out tonight, the night of the full moon, in order to hunt a werewolf. The werewolf indeed appears and slays one of the men in his party. One of the men believes he has found the werewolf and fires, only to realize he shot one of his colleagues, the blacksmith. The father tells his son something behind closed doors, and dies. The son continues his father's work as a blacksmith and heads out to hunt the werewolf on his own. But he is not really hunting him, but in fact has become a werewolf himself! While the story itself is nothing special, Sauri's artwork continues to be quite amazing. That said, probably more so than any other story of his, the numerous swipes he is making from other artists is quite noticeable. In particular the stories "Werewolf by Frank Frazetta in Creepy #1 and "A Most Private Terror" by Esteban Maroto in Creepy #52.

Third is "Death Walk" with story by Ed Fedory and art by Jose Cardona (credited to Andy  Crandon). At the funeral for a young girl, a doctor who is said to have drained her blood is told off. A gnome approaches him, wanting to buy the blood he has drained, but the doctor claims he is a phlebotomist and is doing this to research blood disease. He refuses, and the gnome claims he will still get the blood. That night, the gnome's master, the vampire Baron Korlok arrives at the doctor's home and senses that he has seen him somewhere before. The doctor shows no fear and instead uses a stake rigged up behind a canvas to slay the Baron. The doctor transforms, revealing him to be the king of death, which is why the vampire had recognized him. I was expecting a more ingenious way to slay the vampire (what if he missed?) but at least the end reveal of the doctor's true nature somewhat makes up for it.

Next is "Time for Living, Time for Dying", a brief text feature by Al Hewetson with a page of art by Gene Day.

Fourth story is "The Vampire Freaks" by Al Hewetson (story, credited as William Davie) and Paul Pueyo (art, credited as Stan Connerty). A group of freaks, about to be let go by a circus try to determine a new business to form and decide on a cruise ship, the Good Ship Fortune. Suddenly someone is found dead, bitten by a vampire. There is a lot of blame tossed around, in particular at the freaks and a smaller one in particular, Tony, who dies when the boat hits the shore. One of the little kids on board reveals that the victim actually died of a heart attack and was bit by a water rat. The freaks decide to continue their cruise and tell someone to get off their boat, although the final panel is so small we can't tell who. This is a bit of a mess of a story, with some rather weak or confusing art by Pueyo as well. I can't figure out for the life of me how Tony died or why it was a little kid who figured things out.

Fifth is The "Thing in the Ragged Mountains" by Al Hewetson (story, credited as Ted Freeman) and Amador Garcia (art, credited as Walter Fortiss). A trio of men hunting in the West Virginia mountains come across a Bigfoot-like creature. One of them shoots at it but it has no effect and the Bigfoot kills him. The other two wait in a cave but one of them swears revenge and fires right into the head of the Bigfoot, to no effect. One of the men tries to flee, but trips over a rock and is come upon by the best. It then heads towards the cave where the last one is. It suddenly turns around though. Shots fire out and the last survivor, Ted, finds a rescue party outside. It is the sheriff and some deputies come to arrest him for shooting his colleagues. There is no trace of the creature and his colleagues were killed by bullets. Ted is put into an insane asylum, with this story as his defense, which the writers claim was provided to them. He believes the creature shot the men in order to frame him! While Garcia's art is average at best, I enjoyed this story quite a lot for its uniqueness.

Sixth is "Fistful of Flesh" by Al Hewetson (story, credited as Leslie Jerome) and Folsengo Cabrerizo (art, credited as Denis Ford). A movie shoots a scene featuring a vampire biting a young woman in an old town in Arizona. Later, when shooting a scene about a mob forming to slay the vampire they realize the actor playing the sheriff is dead, slain as if it was by a vampire. A detective has five suspects, those actors who weren't necessary for the day, but the one playing the vampire is the chief suspect. We then cut to a courtroom, where the vampire actor's defense attorney claims his client was on Malibu beach and the stuntman is the real killer. The attorney claims the stuntman is a vampire himself and was worried that he would be found out when he went under the makeup chair. He pulls open the curtains, letting the sunlight in and it kills the stuntman, who really is a vampire. This story is over rather abruptly and surprises me in that there really wasn't a twist at the end.

We wrap up with "Snakewizard!" by Augustine Funnell (story) and Jose Cardona (art, credited to Andy Crandon). Two men, Murray and Lee, travel through the jungle in search of gold, stealing from an innkeeper along the way. Lee is soon attacked and bitten by a snake, which escapes into the jungle. Soon a native comes out, claiming he can help and sucks out the poison. The native claims the snake was his pet and he is a snake wizard. They demand he lead them to the temple of the snake and he does so, at gunpoint. They are soon brought there and find a tremendous amount of gold. But the snake wizard claims they are trespassers and must be dealt with. He turns into a snake and bites them, causing them to turn into gold. The snake wizard being the snake was incredibly obvious to me from the outset, but kudos to Funnell for adding in the gold element which at least provided slightly more interest to the ending.
Posted by Quiddity at 3:57 PM