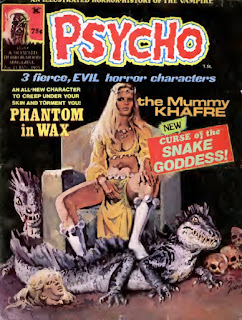 Sebastian Boada provides the cover for this issue of Psycho, cover dated January 1975.

We start with the frontispiece, "People of the Dark" by Robert E. Howard (story) and Gene Day (art).

First story is "The Phantom of the Dead: Midnight in Wax" by Al Hewetson (story) and Jesus Martin Sauri (art). This story is hosted by the Vulture, who had just appeared in Nightmare #22 and as such may have originally been intended for the Tomb of Horror magazine. Once again the vulture introduces a new horror character, this time the titular phantom. Charles Ogle has a wax museum with various fiends and monsters including the Phantom of the Opera. On a stormy night, a bat smashes through a window and lightning strikes the museum, bringing the Phantom to life! We find that the Phantom was built with actual joints and other body parts which enables it to move. It goes outside, scaring a couple, who calls the police. It doesn't respond to the police when they come, but instead goes to a graveyard. When the sun comes up it starts melting, but heads back towards the museum and is found by Ogle. Ogle rebuilds the Phantom, claiming he'll construct it even better this time, and use a human brain! An average story, but Sauri's artwork continues to be very strong.

Second story is "The Curse of the Snake Goddess" by Al Hewetson (story) and Jose Cardona (art). An archaeological dig takes place in Egypt, finding a four thousand year old tomb. Those who have dug it up take their treasures from it, but several suffer mysterious deaths. The finds of the expedition eventually make their way back to America. While the archaeologists work on translating things, a young woman, one of the assistants, finds a snake necklace that she hopes to sell and make a lot of money off of. She ties a rope and starts making her way out the window, but the necklace turns into a snake and kills her, revealing itself to be the source of the deaths. This story was a bit simpler in nature than I expected it to be. Early in the story we have a rather odd segment where a character drives while drinking beer, something quite idiotic, although it is never touched upon again later in the story.

Third is "A Garden of Hellish Delight" by Al Hewetson (story) and Cesar Lopez (art). Earnest is a gardener who is in love with the wealthy heiress Angela. Her father refuses to let them be married however. Earnest cries and his tears cause his plants to grow and kill Angela's father during the night. He and Angela are soon married. Now wealthy, Earnest doesn't need a job but spends all his time on the garden. Many years go by. Earnest and Angela are now old and she has grown bitter over him paying all his attention to his garden rather than her. When she demands a divorce, Earnest cries again, and his tears once again cause his plants to come to life and kill her. He uses her body as fertilizer and spreads this garden throughout their mansion. At the end of the story we see his now dead boy, also being used as fertilizer for the plants.

Fourth is "The Werevampirewolf" by Al Hewetson (story) and Jose Cardona (art). This story is quite the oddity in that it features text only at the start and end of the story. Otherwise every panel has no captions or dialogue. It shows a tale of a vampire and werewolves from 19th century Germany. It includes a vampire being set loose, a mob of werewolves and the vampire becoming some sort of werevampire at the end of the story, despite having been staked in the heart.

Fifth is an Edgar Allen Poe adaption, "The Man of the Crowd" with adaption by Al Hewetson and art by Ferran Sostres. Our protagonist on an autumn day sees a rather disheveled looking man wandering around. He decides to follow him, thinking he is a pick pocket, then a thief, then a murderer, but he does no such things. He decides to confront the man, but the man doesn't react to him, leaving our protagonist to wonder if he's a ghost, mad or imbecile. Not much of a plot to this Poe story, which I recall being a bit happier with when it was adapted by Warren. At a mere 5 pages it goes by pretty quick, but Sostres provides a usual strong art job.

Sixth is "The 300th Birth Day Party!" by Al Hewetson (story) and Ramon Torrents (art). This is a reprint of a story that originally appeared in Nightmare #9. Odd to see a single reprint story in an issue that is otherwise all new, although I always enjoy seeing work from Torrents. Cecille is married to the ugly and scarred, yet rich Walter, and is carrying on an affair with her doctor. When Cecille discovers she has cancer, the only option is to freeze her body, until a time in the future when a cure is found. Cecille willingly goes through with it, hoping that when she awakens she'll have her husband's money, but he'll be long dead. She wakes up 3 centuries later, but finds to her horror that due to advantages in medicine, Walter is still alive!

Seventh is the second chapter in the "Mummy Khafre" series, "The Murderess" by Al Hewetson (story) and Cesar Lopez (art). Khafre decides to flee, jumping into the wagon of a traveling salesman. She takes off her bandages, realizing that only her head remains preserved and the rest of her body is mummified. The salesman spots her and she slays him. Despite the state of her body, she is able to move around and breathe normally and puts on a dress to make herself look normal. Khafre returns to Egypt and finds her tomb. She finds a series of Ushabtiu, small curios which she is able to bring to life to act as her slaves. They lead her to Neferches' tomb where she destroys his mummy. She is found soon after and while she struggles, is taken captive, forced to remain bound. As the story ends she summons the Ushabtiu to set her free. A decent continuation of this series, although with the end of Skywald nearly here we probably won't see much more of it.s

The issue concludes with a one page Zombie Pin-up by Gene Day.
Posted by Quiddity at 7:47 AM