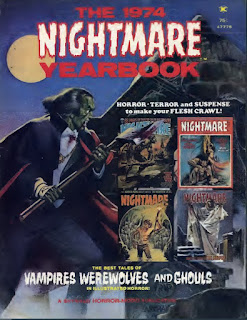 Vicente Segrelles provides the cover for this special issue of Nightmare. For the first time since all the way back with Nightmare 2, a Skywald issue is dominated by reprints. Only the first story is new. The reprints are predominantly from early in Skywald's run, and primarily by American artists, making this issue quite a contrast to those around it.

First is "The God of the Dead" by Al Hewetson (story) and Jose Martin Sauri (art, credited as Bob Martin). While not labeled as such, this story is part of the Dracula series. His castle destroyed, Dracula swears to teach the nearby peasants a lesson by making their daughters vampires and having them kill their parents. Dracula starts biting the neck of various women, turning them into vampires. He is confronted by a man, but has his daughter, whom he has turned into a vampire, kill him. Eventually he is confronted by a boy with a small cross and finds that it is deadly, killing him. It looks like this story will conclude the Dracula series, with a rather predictable ending. The highlight of this story is easily the art; Sauri's style is really similar to that of Esteban Maroto, one of my favorite Warren artists. It will be a blast seeing the remaining Skywald stories he has for that reason.

Next is "A Rottin Deal" by Bruce Jones (story and art), using the pseudonym Philip Roland. This story was originally from Nightmare #3. A young man named Peter travels with his uncle Felix, seeking an old mine around five days away. As they travel through the desert wasteland, devoid of water, Peter decides to kill his uncle and take his canteen. He travels from oasis to oasis but finds that Felix's corpse is following him, beating him to the water, contaminating it. Peter rushes ahead of the corpse, making it to the next oasis in time to drink some water. However he soon finds that his uncle had leprosy, and having uses his canteen, he now has it too! Jones' story and art here is quite strong, making this the best reprint story of the issue.

Third story is "Let the Dreamer Beware" by Jerry Siegel (story) and Ralph Reese (art). This story is originally from Psycho #5. Alex's wife Florence makes his life absolute hell and refuses a divorce. Alex dreams of being in another realm filled with beautiful people. One of them, Dileeth, says she loves him, but he is suddenly whisked back to reality. Dileeth tells Alex he can return by killing his wife, so he poisons her with rat poison. Upon falling asleep he is back in the realm, but now the facade is gone and all the beautiful people are now demons, including Dileeth! Alex wakes and tries his hardest to not fall asleep, even after being arrested and brought to jail for Florence's murder. Eventually he does fall asleep and the demons throw him in acid, which also affects his body in the real world.

Next is "Escape" by Dennis Fujitake (story and art) from Psycho #4. This is a brief 2 page story. The evil Baron Renphrew is captured and chained to a wall in a dungeon. He plans on getting away by having men he paid for dig him out. They are able to dig into the dungeon, but break their way through a stone above the Baron's head, which crushes him! A brief, fun story. Fujitake's art reminds me a lot of Jeff Jones.

Next is "Whence Stalks the Werewolf" from Nightmare #5 by Len Brown (story) and Carlos Garzon (art). Dr. Allan Bund has found a way to transport is patient's consciousness to the past. Using this ability, he has him go back further in time, including military battles and even a werewolf appearance! His colleague Dr. Tracy wants this to stop and leaves to get the police. However once he has come back, we find the patient has turned into a werewolf for real and goes on a rampage! Garzon provides some good art here, reminding me somewhat of Eugene Colan, but I didn't particularly care for the story, not its predictable ending.

Next is "Power of the Pen" from Psycho #5, by Doug Moench (story) and Doug Wildley (art). The author Jeff Dennings is working on a new book, having already written a few characters. Having named his lead after his friend George, Jeff is shocked to find that what he writes actually happens to George in real life! George is sent to the hospital, having been struck by a car and is investigating a drug ring under cover, but Jeff decides to write things such that he forgets about it and change the name of his character to someone else. He then smashes his typewriter, thinking it is responsible for this. Jeff soon realizes he named a character in another story of his after his friend Sandy. He goes to her apartment, to find herself trapped in a mirror, and gets trapped there himself, much like in his story.

Last is "Hag of the Blood Basket"!" by Al Hewetson (story) and Tom Sutton (art, credited by Sean Todd). This story was originally published in Nightmare #4. The Hag of the title appears visually inspired by the Old Witch, one of the 3 hosts from EC's 1950s horror comics. Sutton was obviously a fan, and would eventually do a story for Warren that was a tribute to Graham Ingels, the artist primarily responsible for drawing her. Anyway, this lengthy story (16 pages!) tells the journey of the Hag of the title as she is initially executed during the french revolution, with her head chopped off in the guillotine. We witness her lengthy journey into hell, the various creatures and monsters she encounters there and her desire to escape, only for the story to end with her headless body being chained up in an insane asylum. This story didn't always make the most sense, but the journey was worth it, and Sutton does a great job with the art work.
Posted by Quiddity at 10:15 AM