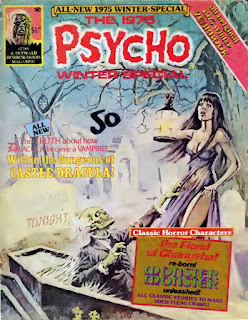 Today I'm covering Psycho issue 24, cover dated March 1975. The cover is provided by Sebastia Boada. This is both the final issue of Psycho and the final issue of Skywald overall! The end has finally come. Gene Day provides the one page frontispiece.

We start with "A Fragment in the Life of Dracula: Within the Walls of Castle Dracula!" by Al Hewetson (story) and Jose Martin Sauri (art). This story continues the storyline started up in Scream #10. Vlad the Impaler is a werewolf, but has not become a vampire yet, with this story telling how. He goes to where he has many prisoners locked up and speaks to one, a gardener, Rathskeller, whose son fled rather than provide him service. Vlad decides to free the man during the full moon, telling him he can go free if he can escape him. Ratskeller flees through the dark woods and eventually is come upon by a number of vampire bats. Vlad consumes not only Rathskeller's body, but that of the bats as well. He returns to his castle, having become a vampire. As usual, really strong art from Sauri here, although he once again appears to be taking clear inspiration from Esteban Maroto's "A Most Private Terror" from Creepy #52. 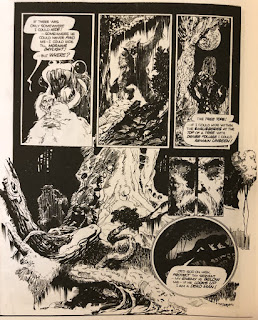 Second is the return of the series, "Monster, Monster" after a long absence with "Visions of Bloody Death". While Augustine Funnell still provides the story, Ricardo Villamonte has been replaced as artist by Paul Puigagut. Our protagonist, currently living in New York under the name Vincent Crayne continues to turn to a werewolf at the full moon. The woman with the amulet whom he is seeking decides to send a demon after him, while also fearing for her son, his roommate. The demon attacks Crayne and she also transforms the landlady into a demon as well to fight him. Crayne comes out on top and turns back into a human, but his roommate is dead. He realizes the woman is going to England and decides to pursue her there. This series continues to be meandering and rather pointless to me. Puigagut's art is very impressive though and a big upgrade from Villamonte. The downside is it can be somewhat confusing at times to figure out what is going on.

Third is "Daughter of Darkness" by Joan Cintron (story) and Maelo Cintron (art). A rare Cintron story that is not part of the Human Gargoyles series. It is his wife providing the story. The story claims this is her first work for Skywald, but she also had contributed to a short story by him early in his Skywald career. A prince's wife is giving birth, but she passes away due to it, making him quite upset at the child, especially when he realizes it is a girl. Two decades pass and the girl is now grown up, asking the midwife about her mother. She is forbidden from leaving, nor from ever loving anyone. That night a vampire appears, flying down to her room and bites her neck. She goes down to see her father later, asking permission to be married, but he refuses and says she is forbid an heir. Suddenly the vampire appears and along with her, bites her father's neck, and she claims there is no need to worry about an heir as he will now live forever. A pretty decent story, and it was good to see Cintron do something outside of the Gargoyles series. 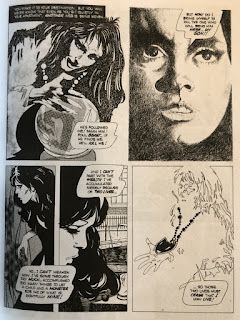 Next is the two page "The Book of the Dead!" by Al Hewetson (story) and Domingo Gomez (art). This brief feature is about H.P. Lovecraft's Necronomicon, and features various monsters and best. It also features an old woman for whom I've seen drawn by at least 3 other Selecciones Illustrada artists, what must be from a very popular photo reference.

Next is "From Hell to Eternity!" by Ed Fedory (story) and Jose Cardona (art). Two men and their assistant Carlos have come to the Pacific island of Zacatecas, with a map on human skin that they believe will lead to riches. They are seeking the tomb of Moran-Kula, ruler of the Toltecs, whom upon his death was bound up in the tomb, his mouth sewn shut. Eventually waters rose and covered their entire city and the tomb. After diving underwater, they find the tomb, and riches within. Thinking there are jewels in Moran-Kula's mouth, they cut open his sewn lips, but flesh eating beetles come out of his mouth and devour them. Meanwhile, Carlos celebrates above water, returning to shore with a giant chest they brought up, but the beetles are inside it as well and consume him too!

Next is "The City of the White Wolf" by Dave Sim (story) and Luis Collado (art). The hunter William Ashton Perry has brought a group to hunt in the winter wilderness. He decides to use himself as bait, putting himself in a fake bear trap. A white wolf approaches him, but then turns, getting William upset as he thinks he can make a thousand dollars from its pelt. William heads out on his own at night and finds the wolf, shooting at it and successfully killing it. In short order however he finds himself surrounded by a pack of wolves. The next morning William's body is found, with much of it having been eaten by the wolves. A unique type of story in that it has no supernatural element to it at all. Sim does a good job in his one and only Skywald story, as does the artist Collado.

The following story is "..If I Should Die Before I Wake..." by Al Hewetson (story) and Jose Cardona (art). A vampire grows nervous about what may happen if his body is found in the graveyard where he makes his home, knowing that even children could kill him during the daytime. He decides to move to some other place the next day. Unfortunately for him, that very day men come to destroy the mausoleum he sleeps in and put his coffin outside, unopened. The coffin is brought to the morgue where his body is discovered and believed to be that of a dead man. As a result, his body is frozen. The vampire dies as he feared, but not in the way he thought! This story's ending is very similar to "I Was a Vampire for Hire" from Scream #2.

Our final story is a second story in "The Fiend of Changsha" series, with "Dead by Day, Fiend by Night" by Al Hewetson (story) and Sanho Kim (art). Our protagonist Chan Hai returns to life after a thief takes the blade that is sticking out of his body. He finds himself unable to step outside in the sunlight due to his being a vampire. Meanwhile the police chief visits the scholar Man Lao, who recognizes Hai to be a vampire. They find Hai, who was a former student of Lao. Hai agrees to go with Lao who can teach him about being a vampire and what he can do about it. The police chief leads him into an ambush though. Hai slays him by drinking his blood, then turns into a bat and flies away. Lao worries the curse he has put upon China by spreading vampirism. A pretty good story to wrap up this issue of Psycho, and Skywald as a whole. Too bad the series has to stop here partway through!

And with that, my coverage of Skywald's individual issues comes to an end. It has been a fun ride to finally experience their works, which while not at the level of Warren, was still a pretty memorable journey. I do plan on making a few more posts about Skywald now that I have finished, focusing in particular on matters such as my favorite stories, features on some of the artists, a discussion of the series used and some other things.
Posted by Quiddity at 4:34 PM