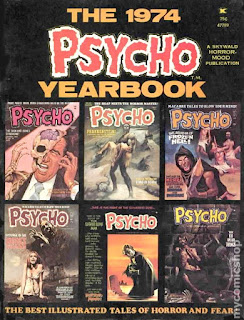 The Psycho 1974 Yearbook is another issue dominated by reprints, with only one new story. Again the stories are mostly from early in Skywald's run. The cover is made up of covers of various prior issues. Paul Pueyo provides the one page frontispiece.

Second is "Slime World" by Chuck McNaughton (story) and Ralph Reese (art). This story was originally published in Nightmare #5. A couple, Sidney and Susan, make their way into the Parisian sewers after a mysterious man tells them to follow them. Underground they find a race of people who have been mutated by the slime in the sewers. They capture and mutate people, either joining their forces, or serving them as food. Sidney and Susan escape their bonds and split up, and after a few weeks Sidney starts transforming into one of the mutants, both physically and mentally. Eventually he is permitted to become someone who tricks people into following him into the sewers, much like what originally happened to him. One of the stronger earlier stories from Skywald's run; Reese also provides some good artwork.

Third is "The Man Who Stole Eternity" by Gardner Fox (story) and Bill Everett (art), originally published in Psycho #3. A thief named Mike kills a man in an alley and steals a pearl necklace from his wife. He hears that he can make a lot of dough by stealing from a Magic Museum. However upon going there he finds a variety of monsters that draw him into a realm of even more monsters! Eventually he sees the woman he stole from, revealed to be a sorceress. She demands he steal her the elixir of life which he agrees to, especially after she sends some monsters after him while he sleeps. He successfully steals the elixir, and wanting eternal life, drinks some before giving it to her. A couple of days later, Mike finds himself completely unable to move. He is declared dead and is buried, alive! While he has eternal life, he has to spend the rest of it in a coffin!

Next is "Beware Small Evils!" by Jack Katz and Frank Giacoia (story and art), originally published in Nightmare #3. In the polluted future of... 1983 (lol), a motorcyle gang, the Spitfires are running amok. Meanwhile a Senator is visiting a scientist who hopes to use the plant culture mutation #320 to restore oxygen to the atmosphere. When the Spitfires arrive at his lab and cause some of the mutation to fall outside, it quickly spreads, consuming the spitfires, growing and multiplying. Using detergent and oil supplied by the senator, the mutations are destroyed, although this leads to any remaining oxygen running out.

Next is "The Inner Man" featuring story and art by Tom Sutton, with assist on the art by Dan Adkins. This story was also originally published in Nightmare #3. Dr. Wroclaw experiments on the soon to be executed prisoner Varga, shrinking his body considerably. Varga is soon mistakenly swallowed by Wroclaw when he downs a pill and ventures his way through his body, eventually reaching his brain. Being inside Wroclaw, Varga is able to control his actions, causing him to slap, then strangle his wife, then murder a man at a pawn shop and run over people in a car. Eventually Wroclaw is decapitated by a closing elevator door and some subconscious monsters kill Varga. A pretty fun story, especially when Wroclaw starts going on his rampage.

The issue concludes with "The Deadly Mark of the Beast!" with art by Syd Shores/Tom Palmer and story by Len Wein. This story was originally published in Skywald's very first horror issue, Nightmare #1. A werewolf has been ravaging the countryside. A man named Collins is convinced that a newcomer to the village, Blake is the werewolf because he's seen walking around at night with his hound. But when Blake is revealed to be blind, people dismiss Collins' claim and leave. When Collins' wife is killed, he becomes enraged, taking Blake at gunpoint at his home and saying they'll wait until the full moon. When Blake grows agitated at the full moon, Collins guns him down. But Blake's hound suddenly reveals that it is a wereman and kills Collins! The ending to this story was quite hilarious and is similar to a comedic episode of The X-Files from a few years back during its short lived resurrection.
Posted by Quiddity at 5:18 PM