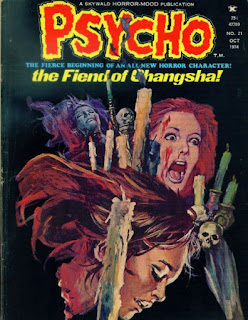 Prieto Muriana provides the cover for this issue of Psycho, cover dated October 1974.

We start with the cover story, "The Fiend of Changsha" by Al Hewetson (story) and Sanho Kim (art). Dracula makes his way across the South China sea, having turned into a bat and boarded a cargo vessel. Once it hits land he heads to the Town of Changsha, a stop gap as he plans on visiting Fu Manchu (with an editor's note to expect it in a future story). While talking to himself in a graveyard, a grave robber comes upon him, whom he bites the neck of so as to turn him into his slave. The grave robber, Chan Hai, returns to his colleagues, a group of thieves, and goes to sleep. Suddenly some soldiers arrive and take out much of the thieves, but Chan Hai attacks them and realizes that even being struck by a sword can't kill him as he's now a vampire. After taking out the soldiers, Chan Hai's remaining colleagues want to make him leader, but he is reluctant to have followers. He plays around with the sword still in his chest and ends up killing himself by mistake. A rather odd ending to this story, I'm not entirely sure what Hewetson was getting at (was the sword supposed to be a stake that only damaged him once it hit his heart?). As the story ends we are asked the question on if we should really let Chan Hai live or die. I guess we'll see the result of the reader's request if we ever see another story featuring him.

Next is an Edgar Allen Poe adaption, "The Facts in the Case of M. Valdemar", with adaption by Al Hewetson and art by Jose Cardona. Our protagonist is invited by author M. Valdemar to hypnotize him. Valdemar is on death's door, but is hypnotized just before he dies, which causes him to still be able to speak, while claiming to be asleep. Our protagonist is advised by the doctor to try and not wake him or Valdemar will die. Seven months pass and Valdemar remains as is, but wishes to die for good. He is released from the transfer and his body completely rots away immediately. This is just a so-so story with not much of a plot (as the protagonist says, it is really just a telling of the facts of the situation). I do recall it being used very effectively as a spring board for an old EC comics story.

Next is "The Gloomb Bomb" by Jack Katz (story and art). Inhabitants of a ship, who are all related to each other, are traveling across the galaxy find an available planet which they investigate. Three of the crew members, Nordak, Corma and Dovery head down but Corma is injured by reptilian monsters. After bringing her back, Nordak disobeys orders, heading to another planet to save a young woman in danger of being enslaved. He decides to stay there, taking the woman as his wife and having a child. Back on the ship it is revealed that they have been searching for an inhabitable planet untouched by cosmic rays, which accelerates the aging process. Nordak has stayed too long on the planet he found for the cosmic ray's effects to be reversible. Other leaders of the tribe seek to kill Nordak but fail, and he becomes leader, changing his name to Noah. His family members come to visit him, revealing his condition and that there will be an oncoming flood. We then find that Nordak has landed on Earth and is the biblical Noah. This story by Katz is a bit of an outlier, being a sci-fi story originally intended for a Skywald all sci-fi magazine and written/drawn years before. It is a bit too long for me and I haven't particularly cared for Skywald's sci-fi stories.

Fourth is "The Ghost of the Corpse" by Al Hewetson (story) and Luis Collado (art). Jerrick is a police photographer who on a day off, happens to see a car accident where the driver is killed. Jerrick takes a photo of the driver, seeing some sort of spirit over it, thinking he's taken a photo of a ghost. Jerrick becomes obsessed with taking more such photos of ghosts and comes to realize that it only happens when he takes the photo of a criminal who has died. He is able to get himself on a drug raid where he convinces a suspect to flee, who gets gunned down, enabling him to take his picture. His boss finds out what has happened and upon telling Jerrick that he's in big trouble, Jerrick flees, and gets into a car accident, dying himself. As the story ends we see the spectral form of Satan 's messenger, come to collect the soul of one going to hell. This was what Jerrick had been capturing through his photos the entire time. This is a fairly good story; Collado's art varies in quality, with some really detailed panels in some places, and much less so in others. A style I've been used to seeing from him in several past stories.

Fifth is " Maxwell's Blood Hammer" by Al Hewetson (story) and Jose Cardona (art, credited to Joe Dentyn). A puppeteer named Anne shows her violent puppet show, starring Max and Maxine, to late night show host Hendershot, using them as satire to expose the violence seen in puppet acts like Punch and Judy. In reality, Max and Maxine are real people, freaks who have pretended to be puppets in order to survive. They are angry that Anne could ruin their career by what she is going to do and start acting on their own, contradicting her during the live show. Angry, Anne leaves without them after the show, but is pursued by a man in a trench coat. It is revealed to be Hendershot and she is able to defend herself and kill him, revealing she too is a freak, with an eye on the back of her neck. Anne, Max and Maxine understand themselves a bit better now and go home in peace. A fairly good story with some well fitting art from Cardona, although the end reveal about Anne with the eye is quite similar to another story, "The Night in the Horror Hotel" from Nightmare #17.

Last is "The Claws of Death" by Ed Fedory (story) and Folsengo Cabrerizo (art). A group of sailors has befriended a tribe in New Guinea, but plan on taking them captive and enslaving them. The tribe, not knowing of this, invites them to watch a ceremony as Mud Men, priests of the tribe with baked mud masks perform a ceremony and summon the goddess Sarrag-Tua. Sarrag-Tua arrives, wearing the mask of a panther and tells the tribe the true plans of the sailors. This causes the sailors to shoot and kill her, but upon trying to take off her mask they realize its her true head. The tribe members are taken captive and brought aboard the ship, but when the masks of the Mud Men are taken off, they too are revealed to have panther heads and they kill the sailors. A pretty decent art job by Cabrerizo in his Skywald debut; Fedory's story is also a good way to wrap the issue up.