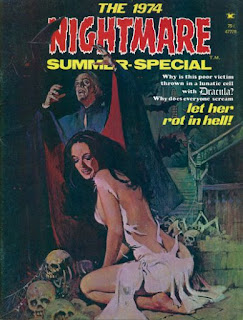 This issue of Nightmare features a cover by Jose Miralles and is cover dated October 1974. Unfortunately we're back to another reprint dominated issue (two in a row now for Nightmare), with only the first story being a new one.

Said new story kicks us off, with "Let Her Rot in Hell", by Al Hewetson (story) and Jose Cardona (art). A man is sentenced to a night in the Cardona prison. The man begs the judge for anything else, but is taken away. A young woman is then brought before him and also sentenced to the prison. Once inside, she wonders why the man before her was so frightened. When the man is let out he begs to be kept there, but when they free him he instead jumps to his death. The woman is then brought into the cell, which seems normal. But later that night a vampire appears and bites her neck, turning her into one. As the guards come to free her the next morning she begs to not let them leave, to expose her to the sunlight. But they don't listen, so like the man before her she jumps to her death. This is a fairly strong story, with a good twist. Cardona's art is well done, as usual.

Next is "Valley of Blood" by Chuch McNaughton (story) and Jack Katz/Frank Giacoia (art), from Psycho #2. A couple, Bart and Valerie head to a mysterious temple in the Himalayas. On the way they are warned by a man, Dargos, about a vampire castle and find a dead vampire skeleton in the ruins of the temple. After getting into a car accident, Valerie is found to need a blood transfusion and gets one from Dargos. The two of them then disappear. Suddenly vampire attacks from a pair of vampires start occurring. Bart eventually comes across the vampire woman, staking her and Valier turns back to human, dying. Dargos then appears and attacks him.

Next is "The Cosmos Strain" by Steve Stern (story) and Mike Kaluta (art) from Nightmare #6. The story features the starship Parnassus, which travels the universe, studying a contagion that has destroyed all life on the planet Medallion. The scientist Broome, his assistant Zork and the robot Darukk investigate, heading to the planet where Zork mistakenly lets out the contagion and Broome is killed. Zork and Darukk realize the only thing to do is use the Sterilibomb, blowing up the planet, and killing them.

Fourth is "Comes the Stalking Monster!" by Tom Sutton (story) and Tom Sutton/Syd Shores (art) from Psycho #4. Dr. Aleister Kohner is obsessed with the occult and along with his girlfriend Erica summons the demon Asmodeus in a pentagram. Asmodeus agrees to teach him the knowledge of the ancients, which he does. However over several weeks Al finds himself growing weaker, his hair losing color and falling out. He summons Asmodeus who reveals that radiation has been emitting from the pentagram. Erica, having worn a pentagram necklace is unharmed and at story end is revealed to be the master of Asmodeus.

Next is "Sleep" by Steve Stern (story) and Jeff Jones (art), originally from Psycho #6. This story takes place in space on a space pod where a Doctor Zim hypnotizes his assistant, Robinson. He then has Robinson speak of what he senses an hour from now (at which point Zim expects him to have been dead from an injury) so he can find out about life after death. As the hour approaches, Zim realizes the horrible truth though, that they will both be dead as their space pod has approached the sun! Jones' art is quite good here, and this was a fairly good sci-fi story.

Next is "Corpse by Computer!" by Robert Kanigher (story) and Doug Wildey (art), from Nightmare #6. Millionaire inventor Phillip Talbot has created the supercomputer Debbie, which operates many things in his mansion. Upon bringing a woman home with him, Debbit kills her with a mechanically controlled knight. Debbie desires Phillip as her companion and won't let him have anyone else. When Phillip starts a relationship with the psychiatrist Karen Benton, Debbie kills her too. Phillip has had enough and tries to delete Debbie's memory, only for her to electrocute him to death.

We wrap up with "Sand Castles" by Ed Fedory (story) and Pablo Marcos (art), originally from Psycho #6. A pilot is transporting two criminals, Benny and Tony, to Mexico, when their plane's engine explodes, forcing them down to the desert sands below. Thus starts a long journey to civilization. With their water running out, the pilot kills Tony, then fills the canteens with his blood. So it probably shouldn't come as that big a surprise pages later when the pilot reveals to Benny that he is a vampire! he kills Benny, filling his canteen with his blood but the days continue to pass and the blood congeals, becoming undrinkable. The pilot eventually finds a castle however and makes his way inside, finding Benny and Tony's ghosts waiting and they throw him down a chasm into hell. Yet again a Skywald story has a rather confusing ending though as our last panel shows their destroyed plane, with several skeletons there making one wonder if any of what happened was real. This was a fairly good story (although a bit too drawn out) and I don't mind them mixing things up at the end, I just wish it was more definitive on what was real.
Posted by Quiddity at 7:13 PM