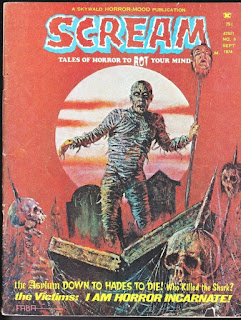 Time for another issue of Scream! This issue is cover dated September 1974 and has a cover by Salvador Faba.

First is "Down to Hades... To Die!" by Augustine Funnell (story) and Paul Puigagut (art). Our protagonist, Martin, awakes to hear a voice calling to him. The voice tells him to follow and Martin no longer finds himself in New York, but a spooky woods where he is attacked by a werewolf, then a vampire, and then rotting corpses. The corpses lead him to a feast where there are various people including many naked women. He demands to be let go and his mind snaps. The voice then decides to find someone else, calling out to a woman named Brenda. The narrative for this story is a quite confusing. Puigagut, who makes his Skywald debut with this story has some rather inconsistent art, with some panels looking rather shoddy, others having a surrealistic look, kind of like what I've seen in some Esteban Maroto stories and an occasional one, like the final panel, drawn very well with some great detail.

Next is "Metzengerstein" an Edgar Allen Poe adaption from Al Hewetson, with art by Luis Collado. The story tells of the conflict between the Berlifitzing and Metzengerstein families. Baron Frederick of the Metzengerstein family burns the stables of the Berlifitzing castle just a few days after coming of age. Frederick sits down to look at a tapestry in his castle and finds the horse within it moving, causing him to flee. In his courtyard, he is told by one of his servants that his enemy Count Berlifitzing died trying to save his horses and they have found a new horse in the area that is rather wild. Frederick starts isolating himself, only spending time with the horse, despite being afraid of its stare. One night Frederick gets up and starts riding on his horse and his entire castle bursts into flame. He then returns, a look of agony on his face as the horse runs into the burning castle. As the story ends we see smoke appear in the shape of a horse over the burning castle and a figure rising from ashes, the corpse of Old Count Berlifitzing. I've never read the original story this is based on, but this was a pretty good one, other than the super elongated and complicated names. Collado's art is fairly decent, with some really nice detailed panels at times.

Third is the latest in the Nosferatu series, "Who Killed the Shark?" by Al Hewetson (story) and Zesar Lopez (art). Nosferatu has the man with the shark mask, Senor Ramon Vorse be the next to tell his tale. Vorse was shanghaied and forced to be a crew member on the ship The Ocean Penguin, but is told by the captain of the great riches they will find. Vorse soon falls in love with the beautiful Maria, daughter of the captain. Vorse kisses Maria when they are alone and says after they find the treasure he will be a rich man and they can escape to be married once back on shore. Maria tells Vorse that the captain plans on killing most of the men once they find the treasure so he and other mutiny and kills him, throwing him to the sharks. Maria promptly betrays Vorse, saying he lusted after the treasure and has been threatened by him. This causes the other men to grab Vorse and throw him overboard to be consumed by the sharks. Despite this, his partially eaten corpse somehow still lives. Maria has the men recover the treasure, expecting to have them arrested once they arrive on shore, but in one of the chests they find, Vorse's corpse there hiding. He grabs Maria, screaming in horror. Back in the present Vorse unmasks himself, revealing his partially eaten body but reveals that he hold Maria's heart in his hand. For once the ending of a story in this series is not a character just revealing their partially destroyed body (at least the third time now the teller has been consumed by some sort of animal), but revealing something else as well. The protagonist hiding in a chest is another concept that has been used before in this series. The net result is, while I continue to enjoy the atmosphere and art (which lacks the rushed look the prior story in the series had), it is about time we wrap this up. The narrative at the start implies that we'd have at least 3 more stories in the series before it is done (although Skywald will go out of business before we have enough issues to get there, making me wonder if this series will end mid-way through). This story actually reminds me quite a lot of the story "In Deep" from Warren's Creepy #83, an excellent story drawn by Richard Corben which features a husband and wife pursued by sharks in the open sea and the husband making it out with only his wife's heart in his hand. In fact as this story came out around 2 years or so before that issue was published I wondered if it was an inspiration for that story.

Fourth is "The Asylum" by Al Hewetson (story, credited to Howie Anderson) and John Agras (art). A young woman named Mary is kept in a large mansion by a woman named Cynthia, along with many other women. When her parents show up looking for her, Cynthia feigns ignorance of her. One night Mary escapes through the window, hitchhiking. We soon find that Mary is a vampire, having killed the man driving, and that Cynthia is trying to cure her and the other women of their being vampires. As the story ends we see Cynthia carrying away the man's body, revealing her to be a ghoul! This story ended I lot quicker than I was expected. Agras' art is a bit more cartoonish in nature than the other artists in the issue.

Fifth is Gothic Fairy Tales with "I never Heard of a Ghost Actually Killing Anyone!" by Al Hewetson (story) and Antonio Borrell (art). A husband and wife wonder where their kids are. We soon see the two kids, David and Angie in a nearby house they believe to be occupied by a ghost. After having not seen it for a month, they figure they can force it out by burning down the place. But then suddenly the ghost does appear, an ax wielding maniac and kills them. After their funeral, their parents storm into the house where they are confronted by both the ghost and the ghost of their two children! The parents argue with the kids and say they are going to spank them so the kids, through the help of the ax wielding ghost, kill them too! After the parent's funeral we turn back to the ghost house, now with the entire family of ghosts there, and the parents spanking the kids. The ax wielding ghost has had enough and lunges towards them with his ax as the story ends. This story was quite hilarious, with the kids and parents bickering, even after they were dead and essentially forming a ghost family.

We wrap up with another story in the Saga of the Victims series, "I Am Treachery... I Am Horror" by Al Hewetson (story) and Jesus Suso Rego (art). We continue where we left off, with our heroines Josey and Anne grabbed by giant tentacles while in a whirlpool. It is revealed to be tentacles of a giant squid! But the two of them soon pass out and find themselves instead in a submarine, which is what the squid actually is. They are greeted by a Nazi dwarf, who claims he was special assistant to Hitler. He claims to be among the last Nazis left and that he travels the sea in his submarine, looking for adventure, which is typically terrorizing people with the squid. By watching him pilot the submarine, our heroines plot their escape and strike him with an ax once they are comfortable piloting it, as it approaches the African coastline. But they find themselves unable to control it properly and it explodes. They are then found and taken by African tribesmen to their warlord, who speaks English and claims he went to Harvard and now manipulates his tribesmen. He claims that they will eventually be eaten as his tribe is made up of cannibals. Anne and Josey break out of their bonds and try escaping, only for the Warlord to grab a hold of them and laugh as the story ends. We get more of the same with this series here; excellent art by Suso and a storyline that continues to be as over the top as possible, pushing our heroines through as many horror story tropes as it can. It continues to be fairly good though, and I look forward to where we go next.