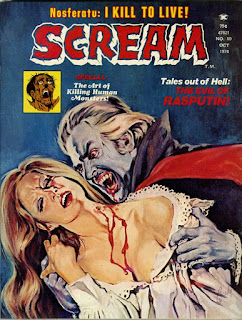 We start with the one page frontispiece, "The Narrative of Arthur Gordon Pym of Nantucket" preview by Cesar Lopez (art). This is a preview of an upcoming adaption of the Edgar Allen Poe novel, although Skywald folded before it saw print.

First story is "My Flesh Crawls" by Al Hewetson (story) and Jesus Martin Sauri (art). The town of Kolosk is plagued by monsters. The townsfolk fear both a vampire and werewolf, and a young barmaid rushing home at night is killed by the vampire. An angry mob forms, believing the inhabitant of the local castle, Wilhelm Volusk to be involved. As they come upon him, Wilhelm, who really is a vampire, flees from the castle, but comes upon the werewolf in the street, Anton, who hopes that by killing him, attention on him will die down. While in his werewolf form, Anton slays Wilhelm, then turns back into his human form. His belief that the attention will die down is mistaken though, the other townsfolk still want to slay the werewolf and are able to figure out Anton is it since he was on his own, and couldn't have slayed Wilhelm so easily with a weak sword. This story ends quite abruptly, as if a page was missing. Sauri's art at times is quite strong, as I have mentioned before, very similar in nature to Esteban Maroto's style, and I think at times swiping from him. As we hit the end of the story the art quality goes down quite a bit though.

Second is "A Fragment in the Life of Dracula: Creatures in the Night" by Al Hewetson (story) and Jose Cardona (art). This story tells of Dracula's childhood, as prince of Wallachia. His father shows him the various ways to torture criminals, such as the rack and iron maiden, and eventually a giant pit. He brings a thief before him who makes excuses and is thrown into it where lizard-like creatures kill him. Another criminal, a poacher, admits to his crime of killing a deer and is set free. Dracula's father shows him a dwarf in a cell who is thought to be a werewolf and explains that one can become a vampire by drinking werewolf's blood. That night, the werewolf breaks free, killing Dracula's mother then battles his father, mortally wounding both of them. Dracula's father refuses to drink the blood of the werewolf, which will save his life, and dies. Yet Dracula decides to drink it, making him the famous vampire we know of. A rather unique take on the origin of Dracula. Some good art as usual by Cardona here although I did catch a very obvious Angelo Torres swipe from one of his earlier Warren stories.

Third is "The Murders in the Rue Morgue", an Edgar Allen Poe adaption by Al Hewetson, with art by Cesar Lopez. The investigator Auguste Dupin is called upon for a strange case where a woman and her daughter are found killed in their trashed room. The daughter is found stuffed in the chimney while the mother's head falls off once her body is taken a hold of. Yet oddly enough there are no valuables taken from the room and the only way the killer could have gotten out was through the window, several stories high. Through the investigation Dupin figures out that the killer is an orangutan, brought to the town in secret by a man who was hoping to sell it. The orangutan became interested in the man shaving and started playing with a razor. Fleeing from the man, it went into the victim's room, trying to shave the mother only to nearly cut her head off instead, and killed the daughter when she screamed before fleeing out the window. The orangutan is soon brought to captivity. This is a fairly good adaption of this rather lesser known, but ingenious Poe tale.

Fourth is "The Stranger is the Vampire" by Al Hewetson (story) and Paul Pueyo (art). A vampire has plagued the town of Coretta, Spain. The mayor gets together a group of vigilantes to slay the vampire, believing it to be a stranger who has recently appeared in town. The group decides to watch the stranger with everything he does, wanting to catch him in the act so they don't kill an innocent man. A barmaid is killed, as is the man who was watching the stranger, so they head to where he is staying, wanting to drag him out into the sunlight as evidence he is a vampire. As they drag him out, they find the real vampire, in the act of killing his victim. They are able to kill the vampire, finding him to be an old man they suspected at first, but thought to be dead. We then find out that the stranger, who was left on his own once the vampire appeared, really is a vampire himself! A pretty good ending to this story, although I can't help but have some disappointment at it being so similar in nature to "My Flesh Crawls". Also Pueyo's art is rather mediocre compared to the strong art jobs around it.

We conclude with a return to the Tales Out of Hell series with "In His Master's Blood" by Al Hewetson (story) and Jesus Duran (art). The young boy, Walter Thurber, under hypnosis tells of the past lives he has had, this time speaking of how he was the son of Rasputin, Myshkin. He speaks of how Rasputin was actually a vampire, and one night reveals this to him, beating him while in bat form. Myshkin grows to adult age, neither he nor his father having revealed he was Rasputin's son and plots to kill him with an ax. He fails to kill his father, but later receives aid from a Prince Felix. Rasputin is fed poison and then shot, but neither kills him. He is then bound and thrown into the icy water. Myshkin is pursued by vampire bats right after though and becomes a vampire himself. Wondering if his father is still alive, Myshkin jumps into the icy water and finds that his father is indeed dead. But he has trouble making it up to the surface and hours later when he does, is mistaken for Rasputin and slain. As the story ends, we are previewed the next past life that Walter will speak of, that of the Marquis de Sade. While I didn't care for the first story in this series, this one was pretty strong. The tale of Rasputin has always been an interesting one, and him being a vampire is a good fictional explanation for why he was so hard to kill. While I think this series had a lot of potential to get into a lot more real life, historical "monsters", this would be the final story due to the eminent end of the Skywald line.